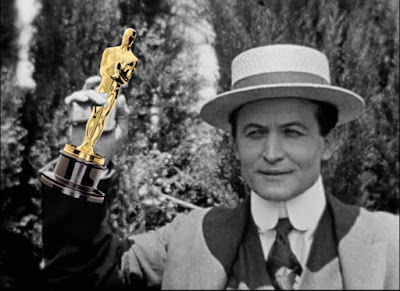 When Houdini made his movies in Hollywood, there were no gala movie premieres, no Hollywood sign, and no Academy Awards. But that hasn't stopped him from being named Best Actor of 1919! Yes, Houdini has now picked up an Oscar via the blog Through the Shattered Lens Presents The Oscars, which re-imagines Oscar history even in the years prior to the official start of the Academy Awards in 1928.

The site has named Houdini Best Actor of 1919 for "playing himself" in The Grim Game. The award was presented by his friend Roscoe "Fatty" Arbuckle at The Sixth Annual Academy Awards held on February 20, 1920 at the Hollywood Hotel.

Other winners included James Cruze as Best Director for The Roaring Road. Cruze also directed Houdini in Terror Island in 1920 (so let's not forget him next year). Mary Miles Minter took home the Best Actress Oscar for Anne of Green Gables. Bolshevism on Trial was named Best Picture of 1919.

While The Grim Game was also nominated for Best Engineering Effects, it lost out to Burton King's The Lost Battalion. King would later direct Houdini in The Man From Beyond and Haldane of the Secret Service.

Congratulations to Houdini for not only conquering Hollywood this year with the triumphant return of The Grim Game, but now conquering The Motion Picture Academy. He's King of the World!

Thanks to Dorothy Dietrich and Dicks Brookz at the Houdini Museum in Scranton for discovering this one. Here's remembering our own magical night in Hollywood at the premiere of the now Oscar winning The Grim Game. 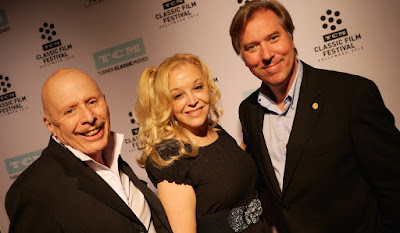