The production filmed this scene last year at the Palace Theatre in Manchester, where the real Houdini performed the same feat. However, it could not have been "100 years to the day" as some publicly has stated. Houdini was touring the U.S. throughout 1915. Derek Tait in Houdini The British Tours shows Houdini performing at the Palace Theatre in Manchester (Oxford Street) in 1913.

So how does this depiction compare to others? Not bad! The cell is pretty good reproduction of Houdini's real cell, notably the stocks, although it is much larger and has a glass back, which Houdini's cell did not have. As I noted in my episode one review, they resist having Houdini appear as his own axe-wielding assistant at the end. This "twist" was created by Doug Henning in 1975, but recent Houdini biopics have seized on it as the way to conclude the escape. In this regard, the admittedly fictional Houdini & Doyle restores some welcome reality.

The posters on stage are based on real Houdini posters. The bathing suit Weston is wearing is what Houdini would sometimes wear during outdoor underwater escapes (on stage he wore a one piece). As discussed here, the attractive and put-upon Florrie is fictional. And, yes, there's the ever present giant clock.

Overall, I think we should tip our hats to production designer Arwel Jones for giving us a pretty darn good USD! Looking forward to what else Houdini & Doyle has to offer when the series premiers next week on FOX. 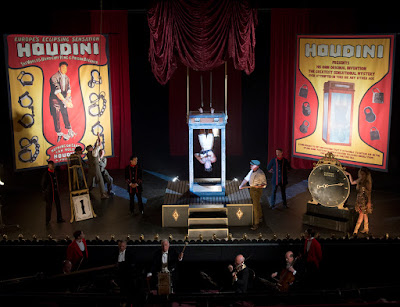 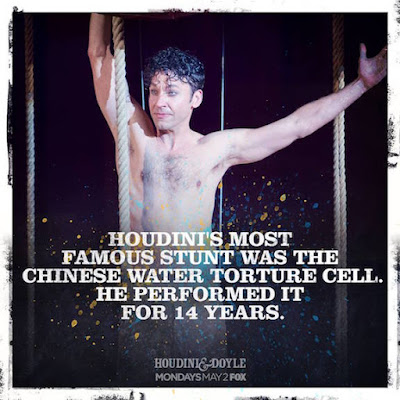 Houdini & Doyle stars Michael Weston as Houdini, Stephen Mangan as Arthur Conan Doyle, and Rebecca Liddiard as Constable Adelaide Stratton. It premieres next Monday, May 2, at 9:00 PM ET/PT on FOX.