The first issue of ROUGH RIDERS, the new graphic novel series that has Houdini teaming with other famous notables, is released today by Aftershock Comics. The series is written by television producer Adam Glass (a Houdini buff) with artwork by Pat Olliffe. 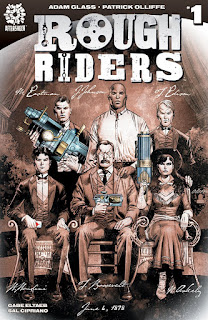 Led by a young Theodore Roosevelt, a motley crew of soon-to-be American legends must work together to solve a mystery that threatens life itself. Harry Houdini — street magician and master of misdirection. Annie Oakley — a washed-up entertainer, eager for a chance to prove herself in a real war. Jack Johnson — an undefeated brawler and the son of ex-slaves, determined to get his shot at the heavyweight championship…When a terrifying alien technology destroys the USS Maine, these unlikely allies set sail for bloody Cuba, into the heart of a brewing conflict, to wage a shadow war against the greatest threat mankind has ever known. Before they were famous, they were…ROUGH RIDERS.


As you can see in the image below, issue #1 comes in three variant covers, two of which show Houdini. You can get the variant Houdini (water tank) cover at Little Shop of Comics. It's limited to 300 copies. The regular group shot cover can be found on Amazon.

ROUGH RIDERS #2 will sport a terrific full Houdini cover and is due out May 4, 2016.