"Houdini’s Poutini" is a game currently being offered via Kickstarter in which players representing a group of magicians must escape a dinner party before Houdini's unappetizing poutine is served. 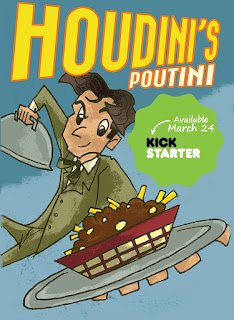 Harry Houdini is throwing a dinner party for the world’s greatest magicians. To make this evening more special, he has prepared a unique delicacy - poutine! Unfortunately for everyone at the party, Houdini is a terrible cook. Each player must use their skills in magic to escape from the party without hurting Houdini’s feelings.

Houdini’s Poutini is a competitive game for 2-5 players, where each player represents a troupe of 5 magicians. You must collect a combination of items with which you can perform magical escapes from the party. Houdini will mingle about the party, making it more difficult to escape the party without hurting his feelings. You must use your skills as a magician to get your entire troupe free from the party before time runs out and the poutine is served!


Houdini's Poutini is developed by Force Perspective Entertainment. The Kickstarter campaign was launched on Houdini's birthday (March 24) as is close to reaching its $2,500 goal. I typically don't share Kickstarters, but their pitch video below won me over with how it incorporates footage from Haldane of the Secret Service.

For those who are curious, poutine is a Canadian dish made with french fries and cheese curds topped with a light brown gravy. There's no record of Houdini ever making poutine (it appeared in the 1950s), but below are links to some real-life Houdini culinary concoctions.