A Regular Little Houdini in the USA

Welsh actor Daniel Llewelyn-Williams is bringing his acclaimed one-man show, A Regular Little Houdini, to the U.S. for a special three city tour. Performances kick off at the Hollywood Festival Fringe, June 16 to 23. WILD ABOUT HARRY readers get a special 50% discount by entering the code "handcuffs" when buying tickets at the festival website. 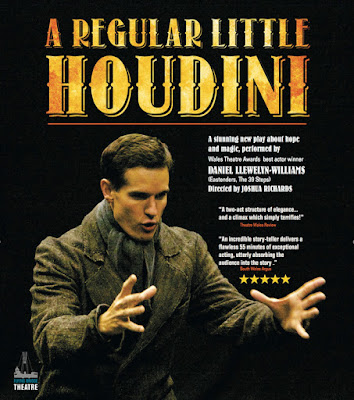 A Regular Little Houdini, set in Newport, South Wales at the turn of the last century, is a coming of age story. A tenacious young boy from the docks idolizes Houdini and commits himself to a life of magic. But the harsh reality of working class life in Edwardian Britain gets in the way. Regardless, he trains himself to emulate his hero’s magic tricks and escapology on the town’s famous landmarks while his toiling family struggle to accept their son’s eccentricity. As he matures our boy finds himself an integral part of the most significant and terrifying events of British industrial history and his personal journey intersects with the great showman himself. With his hero’s guidance, he fights against conformity, in the mud and the filth, against the irrepressible tide of responsibility, to balance childhood folly and humanity with the cynicism of adulthood. It’s a story of youthful imagination and joie de vivre, with a very real vein of jeopardy brought about by the dangers of daily life in a ruthless Edwardian dock town. It’s a beautiful tale of hope and magic inspired by the author’s own family stories and of course, the real life visits of Houdini to Wales.

After Los Angeles, the show travels to the Spreckels Theatre in San Diego as part of the San Diego Fringe (www.sdfringe.org). Performances run from June 26th to July 3rd.

More information can found at the official website: www.aregularlittlehoudini.co.uk.