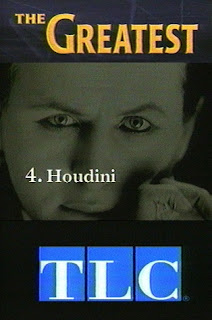 If the 1970s was a boom time for Houdini books, then the 1990s was the heyday of Houdini documentaries. This was largely due to the proliferation of cable channels and the success of A&E's "Biography" series (which did a Houdini episode in 1994). Soon every history and entertainment channel had a similar  weekly documentary series, and a Houdini episode was de rigueur.

It's a good documentary with some great Houdini footage and Bentley's reenactments make it a standout. On the downside, it gives us the acid-on-dress version of the Houdinis courtship, exposes the Milk Can, and makes no mention of Houdini's movie career.

The Greatest: Houdini was never released on VHS or DVD, and is one of the few '90s docs that has not yet found its way onto YouTube. So I've taken the liberty of uploading my own recording of the original 1999 broadcast. YouTube monetized it for music copyright holders (so you will see pop-up ads), but it looks like they are letting it remain, so I'm happy to share it here. Enjoy.