Haldane of the Secret Service DVD-R and streaming video

Amazon has a new listing for Houdini's Haldane of the Secret Service (1923) as a DVD-R and streaming video for download or rent. 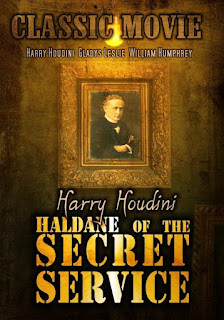 Step back in time to the golden age of Hollywood silent movies. The genius that was Harry Houdini shines through in this classic from the silent movie era.

Here he plays Heath Haldane, secret agent, on the track of a brutal gang of counterfeiters. There’s plenty of close calls and lots of Houdini’s escape tricks along the way. Added into the mix is the beautiful Adele Ormsby, who Haldane loves and must set free!

When sold by Amazon.com, this product is manufactured on demand using DVD-R recordable media. Amazon.com's standard return policy will apply.


Haldane of the Secret Service was Houdini's final feature film and the last made for his Houdini Picture Corporation. It was generally considered lost until a fresh print turned up in 2007 in Los Angeles. It was first released on the Houdini The Movie Star DVD box set in 2008 and later by Alpha Video. I think it's safe to assume this is the same version that has appeared on those earlier DVDs.

Purchase or rent Haldane of the Secret Service at Amazon.