Houdini & Doyle episode 6, The Monsters of Nethermoor, provides an unexpected journey for our heroes in what is now the second half of the 10 episode series. Instead of London, the setting is the countryside, and this time the rolls are reversed; Houdini is the believer and Doyle is the skeptic. The crux of the mystery; aliens! 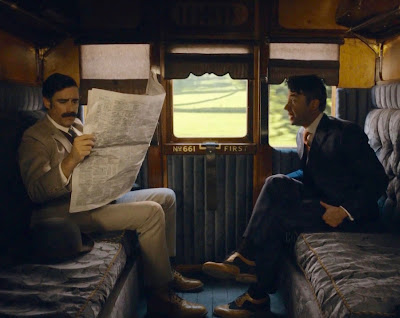 Our first look at Houdini and Doyle in this episode is a clever re-creation the classic Sidney Paget illustration with our heroes in the roles of Holmes and Watson. This is great fun, and I love that it pretty much confirms what has been simmering since episode one -- that Houdini is Doyle's new Sherlock, right down to being an irritant.

Houdini, Doyle and Adelaide arrive in the small town of Nethermoor (shot in Darbyshire) to investigate what's believed to be an alien abduction. But because the couple who experienced the attack are interracial, racism becomes a theme in this episode. Houdini comes to the defense of the black survivor, feeling that Doyle is judging him too quickly because of his race (forget that we've already had several black characters in the series). During the course of the episode, Houdini's own strong feelings about bigotry boil to the surface, and at one point Houdini beats up a man in a bar for his disparaging remarks. (More on this below.) 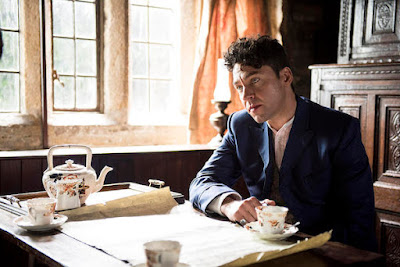 Eventually, Houdini and Doyle find themselves tied up in a cave. Following the role reversal idea, Doyle is able to free himself while Houdini cannot. This sounds better than it plays out as the ropes don't really appear to be holding him in any way that would defeat The Great Houdini. But it's good for a laugh. 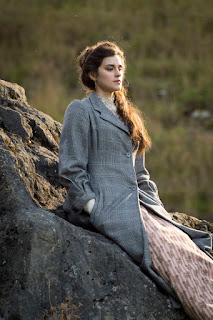 The mystery of Adelaide Stratton continues to deepen, and I have to admit, I'm not loving this. Adelaide is my second favorite character, and I feel she's slipping away from me just as she's slipping away from Houdini and Doyle. I loved her forthrightness and clarity. Now she's a woman with a past and many secrets and that just isn't working as well for me. But I guess we'll see how this develops.

Spoilers
The solution to the mystery is pretty unusual. The abducting creatures are neither monsters nor aliens, but human cave dwellers who have lost all contact with the outside world for generations. I'm not sure this entirely explains their extreme appearance, but it was a nice twist, and Houdini leading them into the light gives Harry a chance to be messianic in a whole new way.

During their meeting with "Mad Martha" (played by veteran actress Janine Duvitski), Houdini reveals his background after she presses him on the matter. At first he says he's from the U.S., but then admits to being born in Budapest and that his family immigrated when he was four. All true. It's also true that Houdini would always claim to be an American (born in Appleton, Wisconsin). "I'm sure you're not a stranger to prejudice," says Martha. 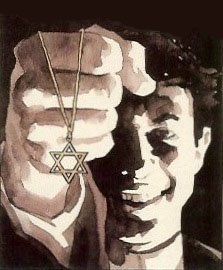 Houdini's heritage comes into play later when he tells Adelaide a story of experiencing anti-Semitism as a boy. It's suggested this is what motivated him to become an escape artist. It's a good story, but it doesn't come from the life of the real Houdini. In fact, if Houdini experienced direct prejudice, this is one aspect of his life that he kept private.

Still, there are indications that Houdini understood full well the world in which he was living. When he ran away from home as a young boy, he concealed his Jewish last name and instead went by White. When in Russian in 1903, Houdini visited the site of a recent Jewish massacre and commented on how Jewish entertainers were "licensed like a dog" when entering the country. Houdini also experienced no shortage of indirect anti-Semitic attacks from Spiritualists. One was Dr. Le Roi Crandon, the husband of Margery, who once stated in a letter to none other than Sir Arthur Conan Doyle, "My deep regret is that this low-minded Jew has any claim on the word American."

The scene in which Houdini gets into a bar fight includes the nice detail of Houdini first inviting the man to hit him in the stomach. (Instead, the man hits him in the face.) Of course, Houdini inviting people to punch him in the stomach is an infamous part of Houdini lore as it was a contributing factor to his death. 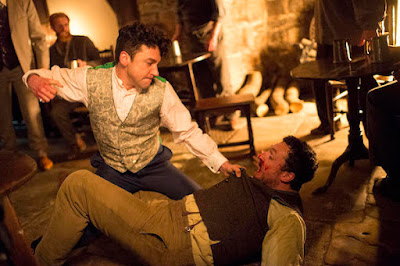 Depicting Houdini as a brawler is also accurate. Houdini grew up in hard times and on rough streets, and the world of circus sideshows and early vaudeville were rough and tumble. Houdini apparently had such a bad fight with "Bill the Dog Boy" that he started carrying a gun. There are also scattered stories of scuffles with various rival Handcuff Kings and cab drivers, and the infamous Houdina Co. brawl that landed Harry in legal trouble. He also gave fight scenes in his movies his all, throwing himself headlong into action, even breaking his wrist in The Master Mystery. 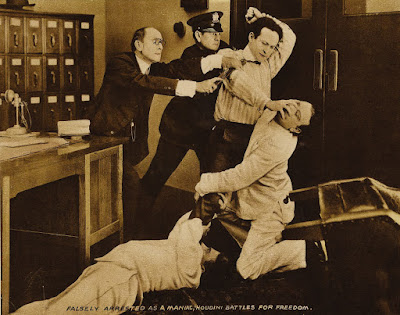 Finally, Houdini is shown employing hypnosis in this episode. Houdini was not known to possess any legitimate hypnotic abilities, but in his struggling days, he learned the rudiments of the act from a man named Billy Diamond and performed for a time as a hypnotist under the name "Professor Murat."

Next Monday: Houdini & Doyle find themselves in "Bedlam."

Houdini Star of David image from The Devil's Workshop.


FOR MORE REVIEWS VISIT MY HOUDINI & DOYLE EPISODE GUIDE.
Written by John Cox at 10:42 AM