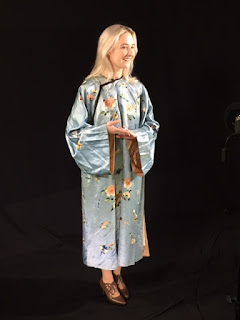 Tony Oursler's modernist film Imponderable is now showing at MoMA in New York City through January 8, 2017. Tony is the grandson of Houdini's friend and colleague Fulton Oursler. The film features Houdini (played by Mark Mitton), Sir Arthur Conan Doyle, and Mina Crandon a.k.a. "Margery" among the cast of characters.

But what makes this MoMA exhibition especially exciting is it includes items on display from Oursler's collection, as well as artifacts from the private Libbet Crandon de Malamud Collection that have never been shown before. These include Margery's seance chairs and her original seance kimono, seen above on actress Sarah Kinlaw who plays the famous medium in the movie.

Here's a description of the film and exhibition from the MoMA website.

Tony Oursler’s Imponderable (2015–16) offers an alternative depiction of modernism that reveals the intersection of technological advancements and occult phenomena over the last two centuries. Presented in a “5-D” cinematic environment utilizing a contemporary form of Pepper’s ghost—a 19th-century phantasmagoric device—and a range of sensory effects (scents, vibrations, etc.), Imponderable is an immersive feature-length film inspired by Oursler’s own archive of ephemera relating to stage magic, spirit photography, pseudoscience, telekinesis, and other manifestations of the paranormal. Drawing on these objects, Imponderable weaves together a social, spiritual, and empirical history of the virtual image that overlaps with the artist’s own family history. A cast of characters including Sir Arthur Conan Doyle, Harry Houdini, Mina “Margery” Crandon, and members of Oursler’s family are portrayed by an eclectic ensemble of artists, musicians, and performers including Kim Gordon, Jim Fletcher, Keith Sanborn, and Constance DeJong. Bringing together Oursler’s ongoing interest in mysticism, psychedelia, popular culture, and media history, the work employs macabre humor and theatrical surrealism to reflect on the irrational relationship between belief systems and the authenticity of images. Imponderable is presented in conjunction with selections from Oursler’s archive relating to the film. 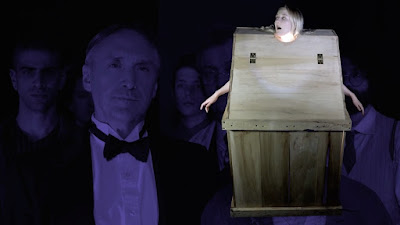 Imponderable was originally commissioned and produced by the LUMA Foundation for the Parc des Ateliers, Arles, France, and LUMA Westbau, Zurich, Switzerland, 2015.

Tony Oursler's work and collection also appear in the book, Imponderable: The Archives of Tony Oursler.

Thanks to Anna Thurlow for the image of Sarah Kinlaw in the Margery kimono.