Houdini & Doyle episode 7, "Bedlam", largely belongs to Doyle. The episode takes us not only inside the infamous insane asylum, but also inside Doyle's mind. Houdini remains on the outside. 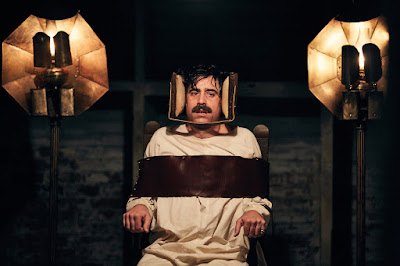 A possible case of demonic possession is what brings Houdini, Doyle and Adelaide Stratton into action. The clues lead them to the Bedlam insane asylum, which we learn once held Doyle's mentally ill father (in reality, Doyle's father was in Sunnyside in Scotland).

This is one wild episode in which reality and hallucination mix as Doyle is put through a Shock Corridoor-type ordeal when he finds himself committed to the asylum under the control of a sadistic doctor. A highlight is that Doyle meets Sherlock Holmes himself, well-played Scottish actor Ewen Bremner. Of course, this is a mental institution and "Sherlock" is a patient who only believes he's the great detective...or is he? 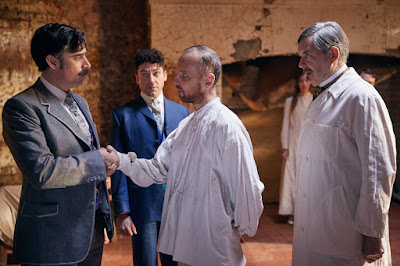 On the outside, Houdini engages in a race against time to save Doyle, while also trying to help Adelaide unravel the mystery of her deceased husband. Turns out he was involved with Polish anarchists who might be targeting Adelaide next.

The climax has Doyle coming to terms with the memory of his alcoholic and mentally ill father. It's too bad show creator David N. Titcher, who wrote this episode, couldn't contrive to get Houdini into a straitjacket. Seems like this wouldn't have been too difficult in an episode set in an insane asylum. But we do get a fun line of dialogue when Houdini meets a confined patient.

"Nice jacket. I have one just like it at home," he says.

As I said, this episode largely focuses on Doyle, so there isn't as much Houdini history for us to chew on this time. But there is some. Early in the episode, Houdini mentions his "Lake Michigan stunt" in which he was trapped beneath the ice of a frozen river. Check out that moment below:

Of course, this is a reference to a famous bit of Houdini lore, said to have occurred at the Belle Isle Bridge in Detroit in 1906. But the trapped under the ice story, so memorably depicted in Houdini (1953), is a myth. While the waters of the Detroit river were icy cold that day, the papers make no mention of an ice sheet or a dramatic accident. [Although I'm currently corresponding with someone who might have evidence to the contrary. Stay tuned!]

Another fact worth mentioning is in regards to Houdini and Doyle's father. In the 1920s, Houdini won in auction a portfolio of artwork done by Charles Doyle. After Houdini's death, Bess returned it to Sir Arthur, prompting the author to write her back:

"The book arrived and filled me with surprise... It really seems like a series of miracles–first that it should exist still, then that it should cross the Atlantic, and finally that it should come back home. I accept it as a peace-offering from your husband, and I thank him as well as you." 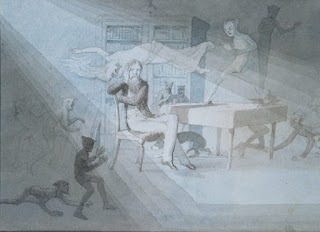 This episode once again has Houdini make a statement that suggests he's an atheist. This was something I tackled in my fact check of episode 3. [Quick answer: he wasn't.]

Finally, as far as Sherlock Holmes is concerned, Houdini himself has had many fictional encounters with the great detective, starting in the 1908 German dime novel, Auf den spuren Houdinis, and most recently in the 2015 graphic novel Sherlock Holmes vs. Houdini. But in 1908, Houdini wrote a letter to Holmes as if he were a real person. 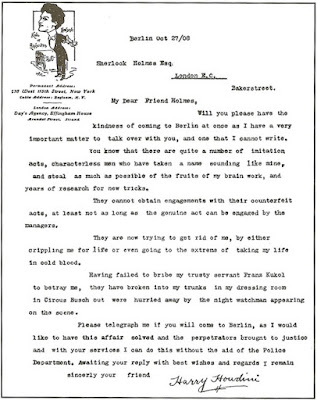 Is this letter just for fun, or did Houdini belong in Bedlam? I'll leave that up to you to decide.


FOR MORE REVIEWS VISIT MY HOUDINI & DOYLE EPISODE GUIDE.
Written by John Cox at 9:05 AM