A Regular Little Houdini in Hollywood 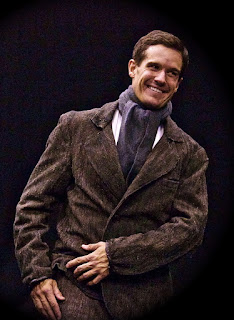 Last night I had the pleasure of seeing Daniel Llewelyn-Willams' one-man show A Regular Little Houdini during its final performance at the Hollywood Festival Fringe. The play has been very well reviewed and I certainly understand why. Daniel delivers a tour de force in both the acting and writing departments in what is clearly a passion project for the talented performer from Wales.

A Regular Little Houdini tells the story of a working class boy growing up in Newport, South Wales at the turn of the century who idolizes Houdini and longs to create "amazements" like his hero. Williams relates the boy's experiences in the first person, which are both funny and harrowing. The tale of his first "amazement" -- hanging off the gondola of the Transporter Bridge -- was so vivid and exciting that I'm convinced in years to come I will recall it as being something that I actually saw. This is the power of Daniel's performance and, not be overlooked, his writing, which I believe is the secret weapon that elevates this play above every other one-person show I've ever seen. In fact, this is the first one-person show that I honestly think can and should be made into a movie. It's a classic coming of age story based on real events with moments as sad, funny, and as exciting as any movie gets. 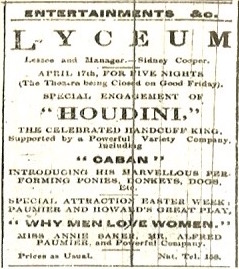 Oh, and it has Houdini in it! (There's evidence for how much this show impressed -- I went two paragraphs before I thought about Harry.) A Regular Little Houdini works as a magnificent tribute to the Handcuff King, who performed in Newport in 1905, 1913 and 1914. (The nice show program contains "Further Reading" about Houdini and Newport, including the original advert right.)

I sometimes think Houdini is now just too mythic to feature as a main character in any work of fiction. Like Abraham Lincoln, just the act of depicting him in a normal setting diminishes him in a way. The best way to show Houdini is to do so from a distance and through the eyes of a comtempory, either an admirer or enemy. This is how A Regular Little Houdini does it, and along with the book Carter Beats The Devil, it's one of the best, most effective and flattering fictional depictions of Houdini I've ever encountered.

So built up is Houdini's legend and importance that when he finally appears (yes, I'm again thinking I saw it) it's as thrilling for the audience as for the boy. And Houdini is not diminished. He doesn't turn out to be a jerk, which is always a temptation in a piece like this; a final coming of age lesson about how your heroes are sometimes all too mortal. This is a rare case where meeting your hero is not a bad thing. Although the unexpected can still happen, and that is certainly the case here, but I won't spoil it.

I should point out that Daniel also performs a few nice sleight of hand tricks during the course of the evening, and there is a real love and respect for the art of magic throughout. Direction is by Joshua Richard. Music is by Meg Cox and available on CD. The show runs 55 minutes that magically fly by.

My only note: At one point Houdini calls out to an assistant named "Bob." Make that "Jim" [Collins] and it's perfection! 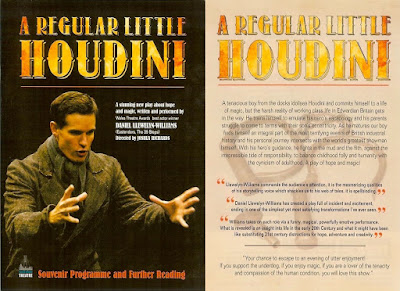 A Regular Little Houdini starts today at the Spreckels Theatre in San Diego as part of the San Diego Fringe, June 26 to July 3. It then moves to Headwaters Theatre in Portland Oregon, July 18-23. It then returns to the UK and the Edinburgh Fringe Festival, August 3-26.