A new Houdini historical marker will be unveiled as part of Williamsport, Pennsylvania's "150th Birthday Party Bash" this 4th of July weekend. Mayor Gabriel J. Campana says, "The city plans to unveil a Houdini plaque in honor of the escape artist and magician who appeared at the Pine Street United Methodist Church to debunk mediums of his day." 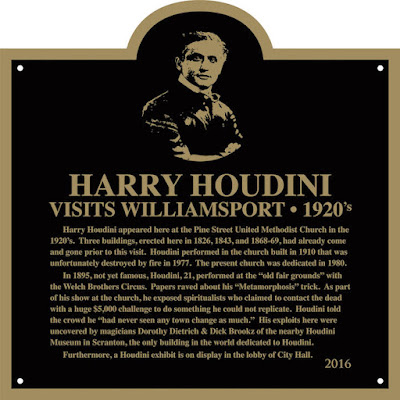 Dorothy Dietrich and Dick Brookz of the Houdini Museum in nearby Scranton are responsible for the plaque. Dorothy and Dick did groundbreaking research into Houdini's appearances in Williamsport, first as part of the Welsh Bros. Circus and later with his anti-spiritualism lecture in the 1920s. They shared their research with city officials, who until then had been unaware of their city's Houdini history.

Dorothy and Dick will perform magic and escapes as part of the dedication celebration on Friday, July 1st at 6:30pm on Pine Street. There is also an ongoing Houdini exhibit at the Williamsport City Hall. 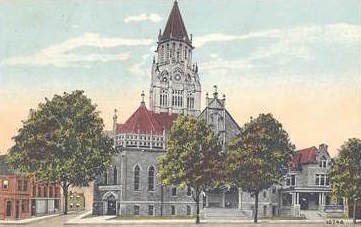 You can get more information on Williamsport's 150th Birthday Bash at the official website.

Thanks to Dorothy and Dick for this news and early peek at the Houdini plaque.