Our great friend Fred Pittella is vacationing in Memphis, Tennessee, but he just can't seem to get away from Houdini! Here's a pic Fred sent me of a certian star on their Walk of Fame. 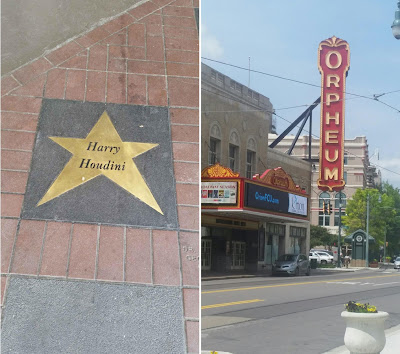 Memphis is home to a 1927 Orpheum theatre which did feature vaudeville in its day. While it was built too late to see Houdini perform, Harry did appear in Memphis in October 1899 at the "Grand Opera House" (below) which originally stood on the site and became part of the Orpheum circuit in 1907.


Thanks Fred!
UPDATE: I've now nailed down two more appearances of Houdini in Memphis, both at the original Orpheum Theater. Houdini returned to the city the week of February 14, 1916. He was back again the week of September 10, 1923.