Hardeen's magic vs. Clara's "IT"

This ad from the March 26, 1928 Harrisburg Evening News shows just how much movies were dominating Vaudeville in the years following Houdini's death. This is when Hardeen carried on the act using props willed to him by his famous brother. Here he's in crowded company. 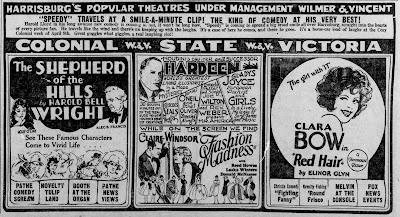 I like that this ad gives us the duration of Hardeen's performance: "30 golden minutes out of the treasure house of Houdini's greatest creations." I also like the ad for Clara Bow's film Red Hair. But I think I'd see Dash instead. He had "IT" as well.