Guest blog: The Houdini Museum of New York, Part I 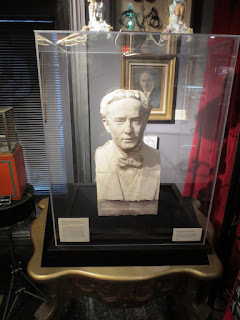 Recently our friend and frequent contributor Neil McNally traveled to New York where he visited the remarkable Houdini Museum of New York in Fantasma Magic. Neil was able to interview owner Roger Dreyer about what is now one of the largest public displays of authentic Houdini memorabilia in the world. I'm very excited to share PART ONE of that interview today.

If you ever find yourself in New York City at the corner of 33rd Street and 7th Avenue look up. On the face of the towering Sports Plaza office building, you might just be able to make out the confidant visage of Harry Houdini staring down at you. Or more to the point, a row of vintage Houdini magic posters taking up one row of office windows. This impressive display is what greeted me one rainy December afternoon as I made my way to “Fantasma Magic,” home to the “Houdini Museum of New York.”

As the elevator doors open you are greeted by a vintage fortune telling machine. Inside his glass cage is Zoltan who is more than happy to share his wisdom with you…for a small fee of course. Push past two metal doors, and you will find yourself transported to a golden age of New York magic. It’s an age that harkens back to a simpler and more innocent time where legends like Al and Jackie Flosso would hawk their magical wares and educate those who were willing to learn.

Fantasma Magic is the brainchild of businessman and Houdini collector Roger Dreyer. After the bulk of his Houdini collection, second only to David Copperfield’s, was used in the travelling exhibition Houdini: Art and Magic he decided to set up a more permanent museum of his own in the foyer of his own magic shop. 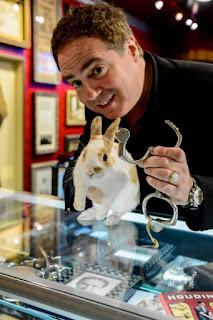 It is here that I was able to meet with Mr. Dreyer and get a personal and insightful tour of his collection. It’s a collection that has to be seen to be believed. But, in the world of Harry Houdini you wouldn’t want it any other way.

Can you tell me a bit about your collection and the Houdini Museum of New York?

"Everything is from my personal collection with the exception of a lone item from the Society of American Magicians which is Houdini’s second bust that was created and then stolen in 1976...and then magically reappeared at the Nassau County Police Department. There’s another story unto itself right there.

Our whole goal (at the museum) is to motivate children to be the next legends of magic or the next Harry Houdini. We have a lot of inspirational talks and different lectures and performances where we even let the kids try on the actual Houdini handcuffs…We’re very proud of a lot of the unique items that we have on display. Many people say this is the largest permanent collection of Houdini items that is on display seven days a week where people can visit."

In terms of the museum setting itself, it’s very obvious that you were going for a very classic magic feel for the displays. Tell us a bit about that. 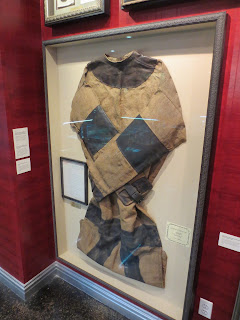 "The Houdini Museum of New York has only been in this current location for 2 ½ years. Fantasma Magic has had a small Houdini display since 2006. But, it really took off with the help of the architect David Rockwell (who had worked on the now defunct Hugh Jackman Houdini musical) who came in and designed our museum for us. It’s with customized, beautiful burgundy wall paper and gold sparkled floors with a really cool type of magic mini-theater."

What initially got you into collecting?

"In the past I was inspired by Al Flosso whom I used to work for as a kid (at Martinka Magic). From him, I would get paid a lot in antique magic which I would collect for years. When I started collecting Houdini in the 90s, I ended up trading a lot of this rare apparatus with other magicians. So, it was a lot of fun acquiring it from people who knew Houdini, relatives of Houdini, as well as through other magic collectors…

A lot of my items came from the estate of Jack Chanin. Many came from Bernard Ernst’s collection…and the Sidney Radner auction. Also, much of it came from Stanley Palm who knew Marie Hinson (Bess Houdini’s sister). So, we have been very fortunate."

As we began to walk throughout the museum, Roger excitedly began to point out the many highlights of the collection and how he obtained them.

"The initial pieces of our collection range from a Robert-Houdin letter, which of course was the inspiration of Jacob Hayman naming Houdini from that...We have the famous 1895 photo of Houdini as the King of Cards…We have pictures of Jacob Hayman as the Brothers Houdini doing the barrel escape. Over here is a picture of Houdini in Atlantic City when he was sixteen. 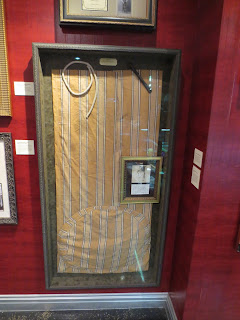 We have something rare. Not only do we have Houdini’s escape mailbag that we actually got from Jack Chanin. Jack Chanin’s father used to run a barbershop in Philadelphia and Houdini once left the mailbag there and never came to pick it back up after the show. During the Sid Radner sale, I was able to buy a whole bunch of Houdini’s picks and equipment. One of them was a mailbag bolt…so this is Guy Jarrett’s own bolt that he designed for Harry Houdini that Houdini used with the reverse thread (for the mailbag escape).

We also have the last trick that Houdini performed onstage for “The Whirlwind of Color.” Houdini collapsed at the end of the first act and this trick was actually finished by his assistants when Houdini was rushed to the hospital." 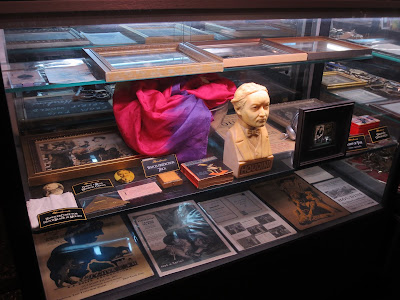 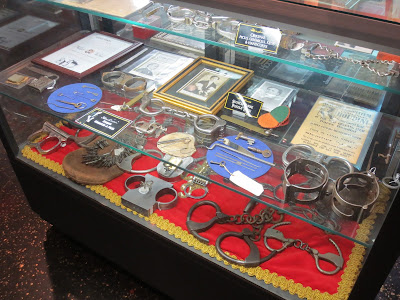 One of the more unique aspects of the Houdini Museum of New York are its interactive elements. Situated by the framed exhibits is an animatronic straight jacketed Houdini that drops from the ceiling upside down…only to magically escape moments later.

"What’s kind of cool about our venue is that we have Houdini coming down every fifteen minutes where kids can see him…Then at the end Houdini does in fact get out of the straight jacket. (Looking at the animatronic Houdini as it escapes from its straight jacket) And yes ladies and gentlemen Harry Houdini has escaped!" 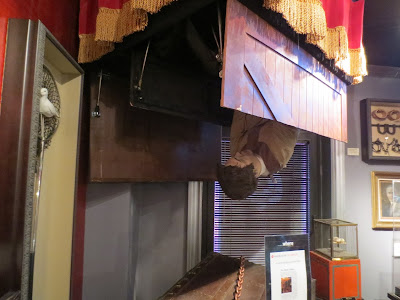 Join us next time for PART TWO when Roger talks more about his thoughts about Houdini, magic history and collecting, and the renowned Houdini escape coffin.