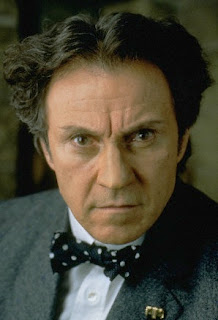 , an underrated family film that was released on October 24, 1997 by Paramount.

Produced by Mel Gibson's ICON Entertainment and Wendy Finerman Productions, FairyTale: A True Story–originally titled One Golden Afternoon–tells the true story of Eisle Wright (Florence Hoath) and Frances Griffiths (Elizabeth Earl) who fooled the "experts" with photographs of paper cut-out fairies they claimed were real. Their greatest champion was Sir Arthur Conan Doyle, who wrote an entire book in support of their pictures, The Coming of the Fairies

. Looking at the photos today, it's astounding to think anyone took them seriously.

Houdini was never involved in the Cottingley investigations as depicted in this film, but his inclusion makes for good drama and a counterpoint to Conan Doyle, played here by the great Peter O'Toole. The film strives to be similar in tone as other '90s hits like A Little Princess

and The Secret Garden

. Unfortunately, the filmmakers elect to show the real fairies within the first ten minutes of the film. I think it would have been far more effective to have held off until the very moving final scene. But this isn't a review per se. We're here to talk Houdini! 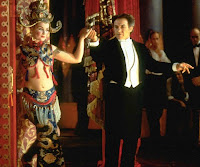 FairyTale wasn't Keitel's first encounter with the master mystifier, something that was revealed by director Charles Sturridge. Keitel was originally set to play Houdini in the 1981 movie, Ragtime

(the small part was ultimately played by Jeffrey DeMunn). So when Keitel came to the project, he had already done quite a bit of research on Houdini.

As part of his ongoing research, Keitel consulted with Dorothy Young, who worked as an assistant in Houdini's full evening show in 1925. Says Dorothy, "He sent his limo down for me to go up and have dinner with him, and I did Houdini's entrance for him about twenty times, and he studied the mannerisms." UK magician Simon Drake is also credited as "magic advisor to Mr. Keitel." His research appears to have paid off. In a review of the film for the L.A. Times, Kevin Thomas said, "Keitel is flat-out perfect for Houdini, intellectually and physically." 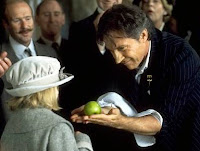 Keitel does make a good Houdini. I like that he plays a more low-key, kinder magician, showing more keen intelligence than bluster. The temptation of many is to play Houdini as always stern and intense, but Keitel is quick with a smile, which matches what we see of the real Harry in newsreels. He's also not out to expose the girls, as might have been the obvious way to go here. Instead, he subtlety encourages them to keep their secrets, as all "masters of illusion" do.

Wardrobe also helps Keitel put his Houdini across. The suit he wears through much of the film is a faithful reproduction of an outfit we see Houdini sporting in several publicity photos from period, right down to his elaborate lapel pin (which here appears to be a small pocket watch). However, for some reason, the filmmakers felt it necessary to give the actor a huge fake hawk nose, which is terribly distracting.

The film opens with an impressive recreation of the suspended straitjacket. Not only is the staging reminiscent of newsreel footage of Houdini doing the actual escape, but specific newsreel shots are authentically recreated. We also get to see Houdini's dressing room table with tribute card to Mama. 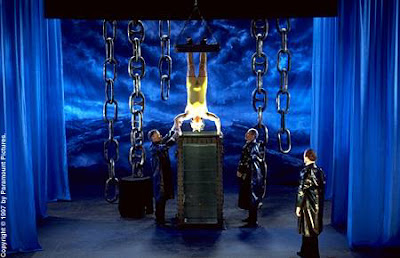 It's become almost a requirement that any movie featuring Houdini as a character must reenact his Water Torture Cell, and FairyTale is no exception. It's a pretty good reproduction at that, although the stage design is much more elaborate than what Houdini would have ever used.

Production designer Michale Howell explained his approach. "I wanted to show the intensity of the showmanship and how that was part of the creating the sense of mystery. There's the idea of danger. There's this big storm backcloth and all the water. It's much colder and frightening. Then among all that blue and the black and gray, there is this big red devil in the background that comes out of the sky."

Another treat for Houdini fans is the inclusion of Jim Collins played by Jason Salkey. While Franz Kukol could be spotted in The Great Houdinis (played by Patrick Culliton), this marks the first time Houdini's most trusted assistant and chief mechanic has been portrayed on screen. Bess, unfortunately, is absent. Producer Mel Gibson appears at the end of the film in an uncredited cameo.

FairyTale: A True Story seemed to not only slip under the radar of movie goers in 1997, but of magic enthusiasts as well. You'd think Harvey Keitel as Houdini would have drawn more attention? But Houdini really isn't the star of this film, and only months before FairyTale was released there was the announcement of a new, big budget Houdini movie to be directed by Paul Verhoeven and, possibly, starring Tom Cruise. That film never happened.

FairyTale is a sweet, well-made family film with two terrific performances by the young leads and a memorable Houdini in Harvey Keitel. Happily, it's also a film that can easily be discovered (or rediscovered) on DVD