David Saltman of The Houdini File has made a remarkable discovery about Houdini's father, Mayer Samuel Weiss. Says David: 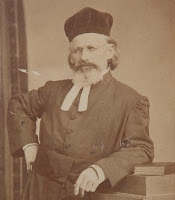 On our recent trip to Milwaukee for the 90th Official Houdini Séance, we discovered the remarkable document reproduced above. It is a certified official copy of the rabbinical ordination credential for Rabbi Mayer Samuel Weiss, Houdini's father. It was issued in 1852, when Weiss was about 21 years old.


This is a true bombshell as many biographers have cast doubt in whether Mayer Samuel was a genuine Rabbi or just a lawyer who adopted the role of Rabbi in America. This document at last puts that notion to rest.