I love it when Houdini and Hollywood intersect, and this photo from our Hinson Endowment is certainly one of those instances. While this doesn't qualify for our "Unpublished Houdini" series (it appeared in Ken Silverman's Houdini!!! The Career of Ehrich Weiss), I still thought I'd still share it because, well, it's awesome! This is Houdini "caught" by a bevy of starlets on a movie set. Doesn't look like he's trying too hard to escape, does it? 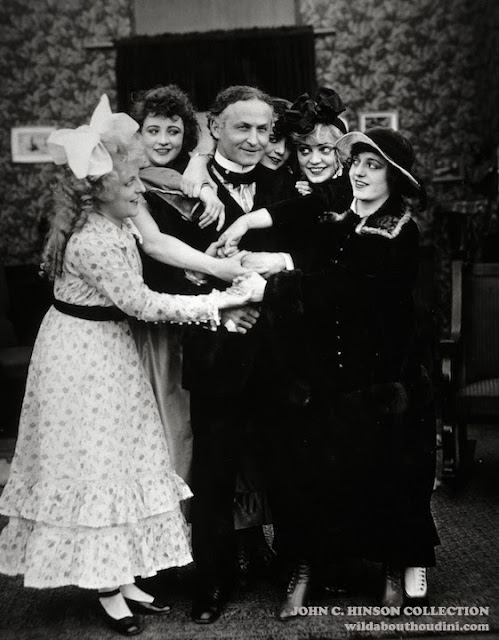 But I'm not posting this just because I like it. Silverman captions this as "With unidentified starlets", but I thought we could do better than that. So I ran this image past Hollywood historian Marc Wanamaker at the amazing Bison Archives and he was able to identify these actresses as "Christie Girls" from the Christie Comedies. Marc believes this photo was taken at the Christie Film Company in Hollywood.

The Christie Studios were housed on the corner of Sunset and Gower at what had been the Nestor Studios, the first ever motion picture studio in Hollywood. That lot later became Columbia Pictures and is today the Sunset-Gower Studios. But before 1916 Christie Comedies were produced at Universal Studios in Universal City (North Hollywood). 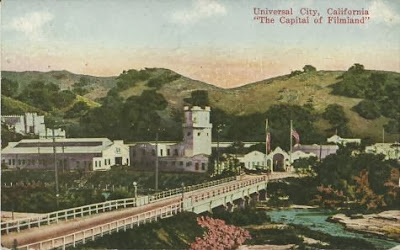 Houdini was performing in Los Angeles in late November/early December 1915 and during that time he had a meeting with Universal about playing Captain Nemo in a production of 20,000 Leagues Under the Sea. It's exciting to think that this photo could have been taken on the day of that meeting and this is Houdini at Universal Studios which, of course, is still a working movie studio and a famous tourist destination today.

So what we have here is Houdini with the Christie Girls at either Universal or the Christie Studios at Sunset-Gower. It's good to be King (of Handcuffs).

You can check out the Christie Girls by name at the NYPL Digital Gallery. 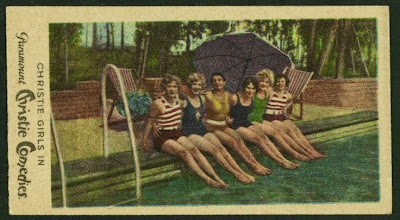 Thanks to Marc Wanamaker at the Bison Archives.

UPDATE: Houdini's discussions with Universal about 20,000 Leagues Under The Sea actually took place in February 1915, so well before he paid his visit to the Christie Girls.

UPDATE: Very excited to now be able to confirm this was taken at Universal Studios on Monday, December 13, 1915. The following is from the The Los Angeles Times, Wed., Dec. 15, 1915.