The ABC series Castle will air a magic-themed episode on January 10, 2011. The description for the episode titled "Poof! You're Dead" reads:

When the owner of historic Drake’s Magic Shop in New York is found drowned in Houdini’s famous water torture tank, Castle and Beckett must delve into the world of magic, magicians and their secrets to find his killer. As part of their investigation, Castle & Beckett meet master magician Tobias Strange (guest star Gilles Marini, Brothers & Sisters, Dancing With the Stars). Meanwhile, the magicians aren’t the only ones keeping secrets, as a new romantic relationship is revealed for Esposito and Lanie, on Castle, MONDAY, JANUARY 10 (10:01-11:00 p.m., ET).


It's funny to think just how many TV crime shows have pretty much done this exact same plot, and they are always a little embarrassing for anyone who knows magic. Nevertheless, I sense a Houdini name-check or two, so Castle gets our endorsement.

And, look, I think I spy Houdini's Metamorphosis and Buried Alive posters on the back wall of "Drake's." To the DVR! 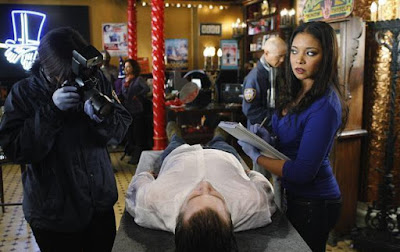