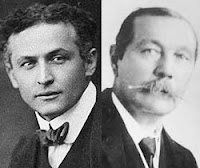 The Hollywood Reporter reports that DreamWorks has purchased the original screenplay Voices from the Dead from screenwriter J. Michael Straczynski. The thriller finds Harry Houdini and Arthur Conan Doyle teaming up with a psychic to solve a set of murders in 1920's New York.

Straczynski wrote the 2008 Angelina Jolie drama Changeling. He also co-wrote the 2009 action thriller Ninja Assassin and was a writer-producer for Babylon 5 and Murder, She Wrote.

It's a wait and see for me.

UPDATE: Spinoff Online reached out to the writer shortly after the announcement and scored the first details on how the story and deal came together. Straczynski tells the website:

I didn’t want to do a story about magic, per se, because that’s been done so many times. Instead I wrapped the story around a murder mystery with supernatural overtones — is it real or isn’t it? — and set them on the path to find out, accompanied by someone who may or may not be a real medium. It’s an action story, a character story, there’s humor and some really scary stuff … I think it’s going to do really well, and I know that the folks involved want to get this made as quickly as possible.”
Written by John Cox at 10:53 PM