Steinmeyer vs. Houdini (fans) and the battle to sell a book about Thurston 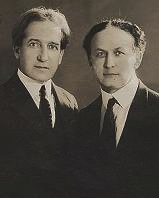 Jim Steinmeyer's much anticipated new book, The Last Greatest Magician in the World: Howard Thurston versus Houdini & the Battles of the American Wizards

is released today by Tarcher. This is a superbly researched and very well written biography of Howard Thurston, one of the most famous names in magic during the first half of the 20th Century. As with his books The Glorious Deception

and Hiding the Elephant

, Jim Steinmeyer has once again produced a must-buy book that is essential for any magic library.

I posted my thoughts on the "versus Houdini" aspect of the book based on a review copy I received back in November. I said then that I thought this element was somewhat overstated as the two men actually seemed to get along relatively well (Houdini had bigger issues with other magicians, as did Thurston). But this is not a criticism. I understand that to sell a book like this, one needs to pitch conflict, and what better name to pit your hero against than HOUDINI. Also, I'm happy the subtitle is there to flag that there is substantial Houdini content in this book. Come for Houdini, stay for Thurston. That's what I did, and I wasn't disappointed.

Now, there's been some heated controversy generated by Houdini biographer Ken Silverman's review in the Wall Street Journal that takes Steinmeyer to task for saying Houdini was "small and unimpressive onstage." This was red meat for Houdini fans, especially those who haven't yet read the book. But know this statement was taken out of context. What Steinmeyer wrote was:

Most spectators remember Houdini's self-confident performances; the brassy mannerisms complimented his daring escapes and his overenunciation seemed to formalize his performances. But more perceptive spectators realized the contradictions suggested by his appearance. Houdini was small and unimpressive onstage; he was intense rather than handsome, challenging rather than commanding. He gave every impression of the Everyman, a David about to encounter society's Goliaths; the police force, handcuffs sealed tanks of water, straitjackets, and locksmiths.


Far from being a criticism, I think this is very perceptive. Patrick Culliton has made this same point. Onstage Houdini wasn't Alexander Herrmann or...Howard Thurston. He was a stocky, slightly bow-legged, little tough guy. I'll take it a step further and note that during his Handcuff King days, Houdini didn't always appear onstage in a tuxedo -- he wore a frock coat and stiff collar. But this was part of his appeal, and that is what Steinmeyer is saying. He was a normal looking guy who then did extraordinary things. So Houdini buffs can back off this one, because far from being a Houdini bashing book, this is a book that gives fresh insight into Houdini by putting him into the context of his day, something that doesn't happen in lessor studies. Steinmeyer also offers up stories about Houdini that have never been told before. That alone makes this book a must.

Yes, Houdini's shortcoming are on show here, like his (sometimes childish) competitiveness and his unsuccessful attempts to mount a traditional magic show. None of this is untrue. But like any good biography, The Last Greatest Magician in the World inhabits the world of its subject, hence, we get a rival's point of view of Houdini. So the negative is somewhat emphasized. I found that to be fascinating and, again, revealing because it puts us in a specific time and place.

Besides, unflattering stories about Houdini don't bother me (as long as they are true). I'm pretty certain Houdini's place in magic history is secure. Frankly, it must be frustrating for Jim Steinmeyer to bang so often into Houdini's legend when trying to tell other stories of the Golden Age of Magic.

My advice is forget any "controversy" and just buy the book and enjoy it for what it is -- a superb biography of Howard Thurston. Also, it's Jim Steinmeyer's latest. That's should be enough for anyone who loves magic. Because when it comes to the battle of the magic historians, it's hard to argue that Jim Steinmeyer isn't the greatest of (us) all.
Written by John Cox at 10:55 AM