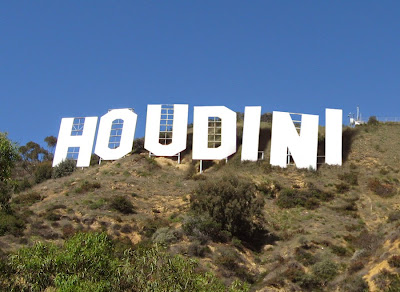 Hollywood is hot to make a movie about Houdini. But what kind of movie is something the dream factory can't seem to figure out. Here's a rundown of all the Houdini projects currently in development to my knowledge. Which one of these, if any, will break free from Development Hell? That's the real mystery.

In May of this year Brody said they were still in the "beginning stages," but my spirit guide tells me the network has a finished screenplay by writer-director Nicholas Meyer (whose father, Bernard C. Meyer, wrote Houdini A Mind in Chains). See: History has a script for their Houdini miniseries.

Are we Wild about History's Houdini? Yes! Even though I'm still warming to the idea of Adrien Brody as Houdini, this is the project I'd most like to see made as it's the only one that appears to be approaching Houdini's story as a traditional biography. And History did a great job promoting their recent miniseries The Bible and The Hatfields and The McCoys, so this could be a real event.

The Secret Life of Houdini - Lionsgate
Intrigued by the idea that Houdini might have once worked as a spy, in 2009 Summit Entertainment (which later merged with Lionsgate) picked up the feature-film rights to The Secret Life of Houdini by William Kalush and Larry Sloman. The studio announced plans to launch a fictional action adventure franchise "featuring a character who is part Indiana Jones and part Sherlock Holmes."

The project has since gone through a turbulent development. Jeff Nathanson was originally attached to write and direct, but that didn't seem to work out. Gary Ross and Joe Wright have both come and gone as potential directors. Now the project has a new screenplay by Noah Oppenheim and the most recent news is that Dean Parisot (Reds 2) is in talks to direct.

Are we Wild? I'm conflicted about this movie, just as I'm conflicted about the Secret Life book itself. Lionsgate certainly knows how to make, shape, and sell a movie for today's audience (The Hunger Games anyone?), but I'm not crazy about having something that further perpetuates the idea that Houdini was a secret agent. Despite my respect for the authors of the book, it's a theory I just can't get behind. And wasn't this movie already made in 1923 as Haldane of the Secret Service?

Houdini - Sony/Columbia
Can you believe this project has been in development for 40+ years? This isn't Development Hell, it's Development Purgatory. But at least they are still trying, and now the project has a screenplay by Scott Frank (Minority Report) and a director in Francis Lawrence (Water for Elephants). But the real mystery of this latest incarnation is the plot.

News reports in 2011 said the movie would be about Houdini falling in love with a beautiful spiritualist, which sounded a lot like Death Defying Acts. But my own Top Secret sources tell me the real plot is about Houdini and Chung Ling Soo working together to break a man out of prison. In fact, Chung Ling Soo plays as big a roll in the movie as Houdini. The script is also said to include a large element of the supernatural.

Are we Wild? Even though it's fiction, yes, I'm excited about this project. This feels more like an "untold" episode of Houdini's life, so it doesn't have that same stigma of rewriting history that the Lionsgate project has. But this company seems chronically incapable of getting Houdini on the screen, and I'm spooked that we haven't heard anything about this project in a few years.

Among The Spirits - NBC
In February 2011 Syfy announced plans to make Among the Spirits, a dramatic "steampunk" television series featuring Houdini and Sir Arthur Conan Doyle solving mysteries in the 1920s. The series would be written and produced by Steve Valentine and Paul Chart, and is reportedly based on a graphic novel of the same name (although I've never been able to track down a copy).

The announcement received a lot of press in 2011, but then nothing. Now word is the series has moved to NBC, but NBC has said nothing about it officially.

Are we Wild? Yeah, a little. I'm not turning cartwheels over the concept, but I think it has potential and I'd love a weekly Houdini TV series to blog about. And if they really drilled down and studied Houdini's spirit investigations, they could come up with some great episodes. Margery as the season finale? Could be fun.

Voices from the Dead - DreamWorks
In 2011 DreamWorks purchased the original screenplay Voices from the Dead from screenwriter J. Michael Straczynski. The script finds Harry Houdini and Sir Arthur Conan Doyle teaming up with a psychic to solve a set of murders in 1920's New York. Yes, it's pretty much the same idea as the Syfy/NBC series, and maybe it's not a coincidence that it was purchased in the same month. It's also the same idea of a half-dozen books and graphic novels, yet it reportedly sold because of the "originality" of the idea. Amazing. Since the purchase, there has been no news.

Are we Wild? While I want a Houdini feature film, a Houdini-Doyle mash-up feels done to death. And, again, do we really want to see Houdini as a detective?

The Houdini Inheritance - Walden Media
Back in July 2012 The Hollywood Reporter broke the "exclusive" news that Chuck co-creator Chris Fedak had been hired to write an untitled Houdini project for Walden Media. According to the report, the story centers on "an unsuspecting high schooler who finds himself in grave danger when he discovers a family secret leading back to the legendary illusionist." Mark Waters is attached to produce and direct through his Watermark Pictures.

Walden's Houdini project has actually been in development since 2006, with Brett Merryman writing the initial screenplay. But it sounds like it received new life with Fedak, although there hasn't been any fresh news on the project in over a year.

Are we Wild? Ambivalent. It's a movie for kids, and from the description, it sounds like it's set in contemporary times. So it's not really a movie about Houdini himself. Maybe Hollywood should realize how much kids love the Tony Curtis Houdini biopic.

In 2013 Chernin announced that Irish filmmaker Kealan O'Rourke would write and direct the project. O'Rourke is a veteran of short films and animation, The Houdini Box would mark his feature film debut.

Are we Wild? I have the same feelings about this as I have about the Walden project, although at least this one is set in Houdini's day and will have at least one scene with the magician. Also, with O'Rourke's background, I wonder if they are considering making this an animated feature? I always though Disney missed the boat by not making an animated Houdini musical in the 1990s.

Carter Beats the Devil - Warner Bros
Based on the superb 2001 novel, Carter Beats The Devil by Glen David Gold -- which features Houdini in a small but significant role -- this project has long been in development. Paramount originally optioned the book in 2002 for Tom Cruise to star and produce. Once that deal lapsed, AMC took a stab at turning it into a TV series. That also didn't work out.

Then in 2010 the project got back on track when Michael Gilio was tapped to write the screenplay with Jon Shestack producing for Warner Bros. Last year it was reported that 21 Jump Street directors Phil Lord and Chris Miller were in talks to direct.

Are we Wild? Sure, it's a great book. Not really a Houdini movie... Still, I'll take it.

The Arcanum - Gold Circle
Based on Thomas Wheeler's fantasy-adventure novel, The Arcanum finds Houdini, Sir Arthur Conan Doyle (look DreamWorks -- so original!), H.P. Lovecraft and Marie Laveau teaming up to fight demons in 1919 New York. Wheeler penned the screenplay which was first purchased by Miramax in 1999. Gold Circle acquired the property in 2004. In 2007 it was reported that writer/director Randall Wallace (The Man in the Iron Mask) had signed aboard to direct. No word since then.

Are we Wild? Meh. Sounds like The League of Extraordinary Gentlemen, and these multi-historical character action mash-ups never seem to work. But I'd see it!

Boilerplate - Paramount
In January 2010 Paramount has picked up rights to Boilerplate: History’s Mechanical Marvel, a graphic novel-picture book hybrid by Paul Guinan and Anina Bennett. The book tells the story of the world's first robot, "Boilerplate", who has a Forrest Gump-like series of adventures. These apparently include working alongside Houdini in silent films. J.J. Abrams Bad Robot is attached to produce.

Are we Wild? I actually like the sound of this movie, and having a scene or two with Houdini certainly doesn't hurt. But I think J.J. is a little busy these days.

"Modern-Day Houdini" - ABC
ABC has now thrown their hat into the Houdini development ring and is working on a "Modern-Day Houdini" TV series. David Hoberman's ABC-based production company, Mandeville, is developing the project with writers Jeff Addis and Will Matthews. It's said to follow "legendary illusionist Harry Houdini" who "partners with an unusually gifted female detective to solve the cases that baffle the LAPD."

I've since learned that it's actually Houdini's spirit returned from the beyond to help fight modern day crime. Okay...

Are we Wild? As silly as this concept sounds, I like the idea of a weekly Houdini TV series enough that I could live with this for a season or two. Bring on Ghost Harry! 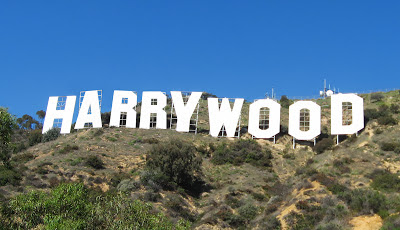