An ultra rare 1927 Russian Houdini book sold for $7000 at Potter & Potter's auction of Old & Rare Conjuring Books held yesterday in Marshall as part of the Midwest Magic History Weekend. The book is one of only three known copies and might be the first book ever published about Houdini outside his own pitchbooks and promotional material. The author, Eugene Tolkachev, saw the Houdini perform in Moscow in 1903. 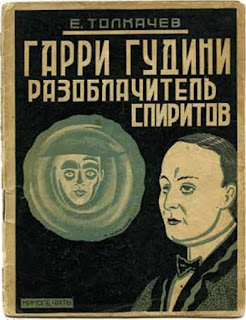 Published as part of a popular series of Soviet brochures, this is one of three known examples and includes many famous photographs of Houdini, including depictions of his Shelton Pool stunt, and spirit séance exposés.


I first became aware of this book last year when Alexey Kozlov, a blogger and Houdini buff from Belarus, shared a copy here on WILD ABOUT HARRY. I'm not sure if this is when the Houdini world in general first learned of its existence, but I believe this could be the first time a copy has appeared at auction.

Watch for my full report on the Midwest Magic History Weekend in Marshall later this week.