I'm off to Fox Studios to join star Michael Weston and the crack social media team to LIVE TWEET the East Coast premiere of Houdini & Doyle. The show starts at 9:00 PM ET (which means 6:00 PM PT).

I've embedded the official Twitter feeds for @HoudiniandDoyle, star @_Michael_Weston, and my own @HoudiniWild below. Please let us know you're watching and feel free to join in!

UPDATE: Thanks to everyone who followed and joined in on our live tweet or the East Coast premiere of Houdini & Doyle. It was a blast. We trended on Twitter for the full hour and the response was very positive. I think the series is off to a great start! 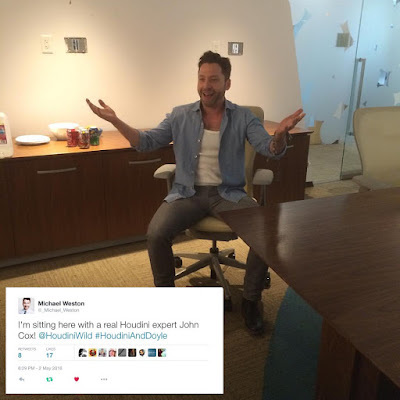 Thanks to Laura Benefiel and Michael Weston for letting me be part of this event. Houdini & Doyle airs Monday's at 9/8c on FOX.