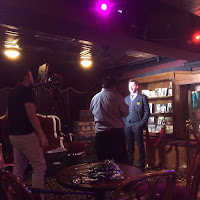 Last Thursday, April 28, a press junket was held at the Magic Castle in Hollywood for the new series Houdini & Doyle. Twelve reporters were invited to join star Michael Weston in a Houdini Seance conduced by Misty Lee. Spirits were raised!

I was also invited to join in and do a few interviews, which was great fun. There was an idea that I might give a presentation on the real Houdini and Doyle, but time didn't allow.

Below are links to some of the reporters stories about their experiences at the Magic Castle. Also the interviews that Misty and I did with Pacific Rim. Enjoy.


True Life: I Tried to Summon Harry Houdini With the Star of Houdini & Doyle
by BILLY NILLES - E! News


Michael Weston tries to connect with Houdini at a Magic Castle séance
by PETER GONZAGA - Examiner.com