Last night FOX aired the premiere episode of Houdini & Doyle, "The Maggie's Redress." I reviewed the episode following its UK premiere on ITV back in March, which you can read HERE.

However, this wasn't exactly the same episode that aired in the UK. For starters, the UK version started with a "cold open" showing Houdini and Doyle trapped in a cellar filling with water. It then flashes back "3 Days Earlier" to the start of the mystery. The U.S. version opens directly with the start mystery, and instead of the "3 Days Earlier," we get the place and date, "London, 1901."

While I missed some of the banter of the UK opener ("I'm not saying I'm going to live. I'm just saying I'm going to outlive you"), I do think it was better to just go into the mystery. I liked delaying the introductions of Houdini and Doyle. It also left room for the more dramatic difference between versions.

The U.S. version contained a full extra scene, and a good one at that! It was the scene that introduces us to Conan Doyle at a book signing. He thinks he's there to launch his new book, The Great Boer War, but the publisher has instead recycled an old Holmes novel. "Would it be so wrong to give them what they want?" he asks. "I'd rather give them what they need," says Doyle. 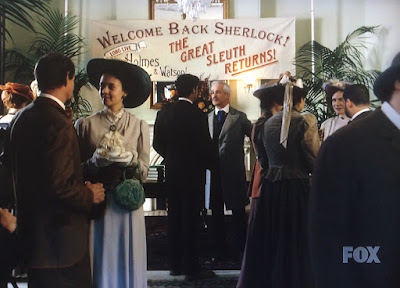 This is a great scene that tells us Doyle is the creator of Sherlock Holmes (for those who need it) and also that the series is set during the "great hiatus" -- a period of five years in which Doyle had killed off Holmes with no intention of bringing the great detective back to life (of course, he later did). Doyle's struggles in this regard play out throughout the series, so this is a critical thing to understand. It also helps reinforce the idea that Houdini becomes the new Holmes in Doyle's life, right down to being an irritant.

Of course, this isn't the first time we've experienced differences between the domestic and international versions of a Houdini story. The 2014 Houdini miniseries was shown in a vastly different and far superior extended edition in the UK (later released on DVD in the U.S.). However, in the case of Houdini & Doyle, this time the U.S. got the better version.

Next Monday, Houdini & Doyle investigate the shooting of a prominent suffragette by a 12-year-old boy who claims he’s avenging his own murder in a past life. Watch for my review and fact check.