The real-life mystery of "Spring Heel’d Jack" is the focus of Houdini & Doyle episode 4. The mysterious cloaked figure stalked London in 1837 and is back to challenge our heroes. 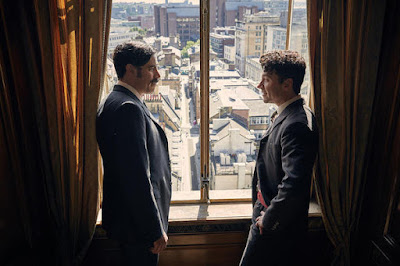 "Spring Heel’d Jack" is directed by Daniel O'Hara, and like his In Manus Dei, it's another standout episode. The mystery this time plays out with a fair amount of action, some of it bloody, with nice themes running through, mainly the coming of the automobile and a suggestion that the reappearance of the demon foretells this "tragedy." In fact, a highlight of the episode is seeing Houdini and Doyle traveling in an early motor car (see more on this below).

One problem that seems to have been nicely addressed is the lack of recognition and references to the two men's fame. Throughout this episode people are appropriately excited to find Harry Houdini and Arthur Conan Doyle in their homes. "You think I'd get tired of it," says Houdini cheerily. 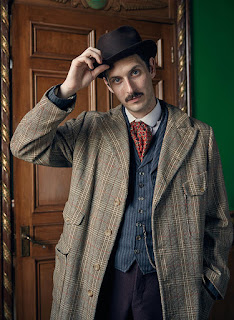 The actors all once again do a wonderful job, with Stephen Mangan and Michael Weston honing their relationship and displaying real chemistry. Rebecca Liddiard's Adelaide Stratton is not as present this time as she's becoming a mystery herself. The episode ends with the revelation that she is married! More to come on that front I'm sure.

As much as I enjoyed the mystery, I was able to guess early on that the reporter, Lyman Biggs (Blake Harrison), was behind the reappearance of Spring Heel'd Jack. I'm not very good at this kind of thing, so I expect those who are better armchair detectives will have had no trouble at all. But it's nice that the solution doesn't explain everything, and the final shot suggests that the legend of Spring Heel’d Jack will endure.

This episode is bookended with Houdini struggling to find the right poster for his show. The poster we see in the opening is based on a French poster for Houdini's 1918-19 movie serial The Master Mystery. Doyle suggests the catch phrase "Death-Defying," which Houdini instantly likes. ("Well done. You outta consider writing.") However, Houdini didn't use "Death-Defying" until his famous Milk Can poster in 1908. But the billing of "Europe's Eclipsing Sensation" is correct for this time period, as is the font used the spell out Houdini's name. 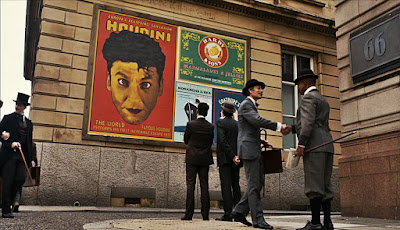 As I mentioned earlier, seeing Houdini and Doyle in an early motor car is a highlight of this episode. However, there's another one of those missed opportunities that could have come with deeper research. Cars made Houdini nervous. He was not a fan of driving nor being driven. It would have added a nice element to this scene having the fearless Houdini be a nervous passenger, something Doyle could have had some fun with. 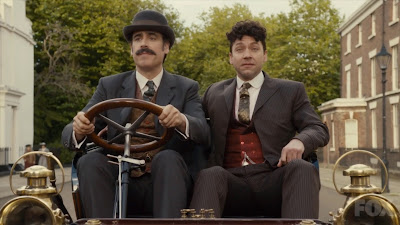 In this episode we get to see Weston's Houdini performing magic tricks for the Doyle children. Performing for children was something the real Houdini enjoyed. Houdini's own "spring heel'd" acrobatics recall some of his movie stunts and human fly exploits. But the biggest historical issue, and the one that I expect will have Houdini buffs most up in arms, is the depiction of Houdini smoking opium to help his chronic pain. The scene is cut down in the U.S. version. In the UK we see him actually smoking from the pipe. 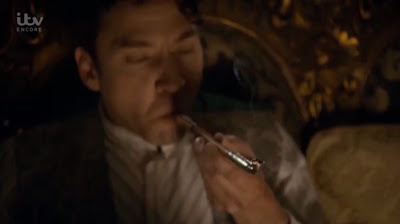 At first, this seems like an anathema. The real Houdini neither drank nor smoke, and extolled the virtues of clean living. But before we beat up the writers too badly, know that they did not pull this out of a hat. On page 95 of the excellent book Masters of Mystery: The Strange Friendship of Arthur Conan Doyle & Harry Houdini by Christopher Sandford (which I suspect was a primary research tool for the series), we find this:

Though personally frugal, and, except on their anniversary, rarely known to join Bess in a glass of champagne, Houdini may have explored other mood altering substances around the time he went to Hollywood. Will Goldston believed he sometimes partook of "a nip of opium," of the kind widely available in Edwardian musical-hall circles, if only for analgesic properties. The drug may have numbed the pain of a damaged kidney and other health-related issues collected over the years, but, as with Bess's drinking, it didn't always produce a felicitous state.


So maybe there is something to this opium idea after-all. However, Will Goldston was known to invent Houdini mythology. It was Goldstone who published the story of Bess crying the Mirror cuff key from the representative during Houdini's famous challenge. So maybe we need to take this one with a "nip" of salt.

Next Monday: Houdini & Doyle face-off with a medium in "The Curse of Korhza."