Chris Hardeen in the ring

Houdini's great grandnephew Chris Hardeen fought a three round fight last week at the New York Style Throwdown III in Cottonwood, AZ. According to a report in Verde Independent, "It was a hard fought battle from both contenders." 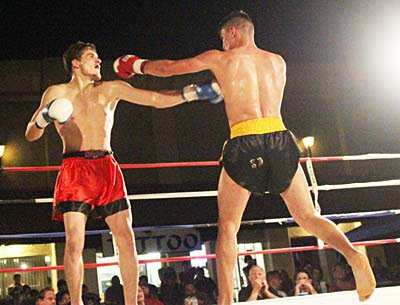 Chris Hardeen of Team Gladiators in Flagstaff (Right) and Besmik Gashi of Kicker’s MMA in Phoenix trade punches during their three round fight on Saturday at the New York Style Throwdown III in Cottonwood. Gashi was victorious in this fight by decision. (Photo by Greg Macafee)


Boxing must be in the Weiss genes. Young Ehrich Weiss boxed in his youth and showed great promise.

Thanks to Patrick Culliton.