LINK: The Day Houdini (Almost) Came Back from the Dead 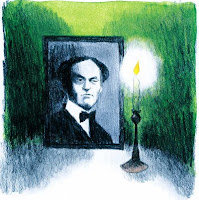 I realize I don't yet have anything on this blog that covers the infamous Arthur Ford seances of 1928-29 in which the "Houdini Code" was revealed. So I'm linking to this well-researched article by Massimo Polidoro, author of Final Séance: The Strange Friendship Between Houdini and Conan Doyle, that lays out all the details. This first appeared in the March/April 2012 issue of Skeptical Inquirer.

Of course, this remains controversial as the Ford seances are still used today by pro-spiritualists as "proof" that Houdini made good on his death bed promise to return from the grave. The story behind the story is that Bess provided Ford with the code in a moment of romantic and alcoholic weakness, but that's a story we'll save for another time.

Click here or on the headline to have a read at the CSI-Center for Skeptical Inquiry website. Next week I will share a unique little something that relates to the Ford seances.