Here's a rare close-up look at Houdini's hands. This incredible unpublished image comes from the collection of Mario Carrandi, Jr. Mario shared this on his Facebook group, THE MAGIQUARIAN, and generously allowed me to share here as well. The photo is from the 1920s. 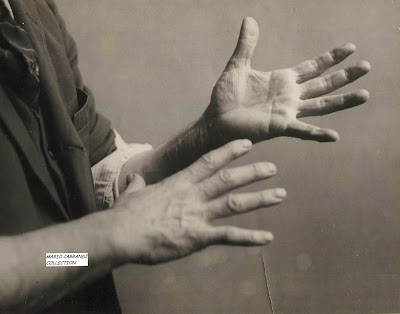 I don't believe I've ever seen a better shot of Houdini's hands, certainly not with a palm up. You can also see what appear to be long scars running down and across his inner arm. Souvenirs of years of damaging handcuff escapes maybe?

Speaking of Houdini's hands, in 1900 a Kansas City newspaper reported that Houdini had his "hand examined" by a local palm-reader named Professor Paul Alexander Johnston (reproduced in Houdini His Legend and His Magic). The article featured an image of "Houdini's palm", and the professor was reported to have prophesied:

"Unless you are exceedingly careful during your thirty-seventh year a violent death is written in this Line of Life," said the palmist. "Your money making period began, I should judge, last year. Provided you save, you will attain great wealth."


For the record, Houdini turned 37 in 1911, a year notable for no close calls. I guess Houdini must have been "exceedingly careful"!