The doctor, the nurse, and the Bible of Ehrich Weiss

Strap yourselves in, because what I have to share today is exciting on many levels. Not since the Houdini spiritualism scrapbook have I felt like I've stumbled on a bigger Houdini "scoop" in regards to an hitherto unknown artifact and some juicy Houdini family history. So here we go.

Let's start with the artifact. The photos below were sent to me by musician Tara O'Grady. This Bible, published in 1883 by The American Bible Society, has been in Tara's family since the late 1970s. As you can see by the inscription, it once belonged to Houdini's father, Mayer Samuel Weiss. In 1893, it appears to have became the personal Bible of 19-year-old Ehrich Weiss. He had already adopted the stage name "Houdini", but still used his real name on meaningful things such as this.

This is an incredible find and an important piece of Houdini history, and the story of how it came to be in Tara's family is just as incredible. But first, enjoy these photos of the Ehrich Weiss Bible. 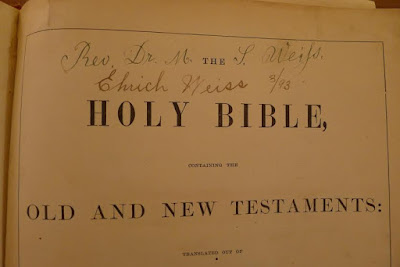 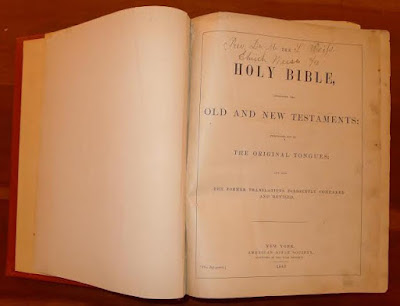 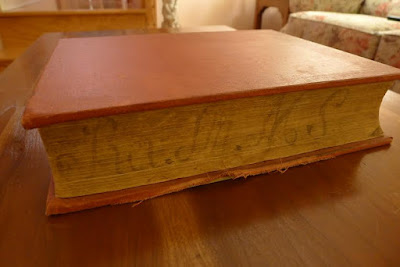 Houdini's brother, Dr. Leopold Weiss, was a successful New York radiologist. For a time he even ran his practice out of Houdini's home in Harlem. Around 1916, Houdini and Leopold had a falling out when Leo married Sadie, the divorced wife of another Weiss brother, Nathan. Speculation is that Houdini conflated the strain of the family scandal with his mother's death (even though his mother had died three years before). Houdini turned against Leo, banishing him from the family cemetery plot and even cutting his head out of family portraits. The brothers never reconciled.

Leopold continued his medical practice in New York City. His nurse was named Marguerite Elliott. And that's where Tara picks up the story:

Mrs. Marguerite Elliott lived across the street from me growing up in New York. She was a nurse and began working for Dr. Leopold Weiss from the moment she graduated nursing school until his retirement in 1949 due to blindness. Leo always showered her with gifts and her husband Robert did not appreciate it. He was quite jealous and he knew the doctor was also a married man. It was obvious Leo was in love with my neighbor. He gave her six plates that he purchased at auction, Myott Staffordshire China, made in England with gold trim. He also gave her his family bible, signed by his father Rev. Dr. M. S. Weisz, and his brother, Ehrich Weiss.


According to Tara, one of the things that Marguerite remembered was that Dr. Weiss did not speak well of his famous brother. Leopold said Houdini "was an embarrassment to the family because he was a magician." Possibly Leo felt entertainment was a lowly profession compared to his own. Or maybe the hard feelings between the brothers went both ways. But it's fascinating to hear what Leo had to say because, until now, we've only heard Houdini's side of the feud.

In 1962, Leopold, elderly and now blind, killed himself by leaping off the roof of his apartment. He left all his belongings to Marguerite Elliott. But Marguerite's husband forbid her to accept, and what might have been left behind by the final Weiss sibling is now long gone. Marguerite's husband died in 1969. Marguerite, who never had children, lived alone.


My parents moved across the street from [Marguerite] in 1970. My mother was a caring Irish immigrant who befriended the old nurse and took care of her when she needed help.

One day, around 1978, my mother was in the basement of Marguerite's house and asked her what the large book on the floor was. It had been sitting on her basement floor for 30 years. It was Houdini's bible, and she gave it to my mother because she had no value for it, and she said perhaps mom could get a "couple of bucks" out of it. She also gave mom the six English plates.


Marguerite Elliott died in 1982. The Weiss family Bible lived on in the home of the O'Grady family, as Tara recalls:

Throughout my childhood, I would occasionally point out the signed bible on my parents' bookshelf to my friends and claimed it was Harry Houdini's. But no one really showed any interest. My parents didn't even show much interest and didn't bother getting it appraised because they didn't know how to go about it. They also didn't know why a Jewish family would own a bible, and since it didn't say Houdini, they thought it wasn’t worth much.

So it sat on their bookshelf for another 30 odd years.

I finally looked into it the other day because I was walking in a Queens cemetery and posted a photo of a tombstone on Facebook. A friend commented asking if Houdini was buried there, and I replied no, but I had his signed bible. The friend asked if I would sell it to him. I said I'd have to research. That's when I realized it was worth a bit more than "a couple of bucks."

And that brings the story to all of us today. Having explored their options, Tara and her family have decided to sell the Bible privately. So if you are interested in adding this to your collection, EMAIL ME and I will put you in touch with Tara.

My thanks to Tara O'Grady for allowing me to "break the news" of this remarkable Houdini artifact here on my blog. Here's hoping the Houdini Bible will find a good new home.

UPDATE: The Ehrich Weiss Bible is going to Budapest.