Larry Weeks had a complete print of Terror Island 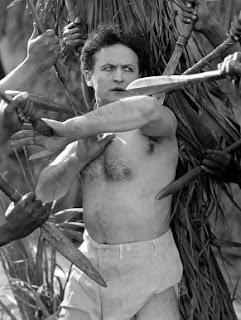 The Grim Game restorationist Rick Schmidlin dropped a bombshell comment at Joe Notaro's "Harry Houdini Circumstantial Evidence" blog. According to Rick, shortly before Larry Weeks passed away, he said he had a complete print of Terror Island, Houdini's second film for Famous Players-Lasky Paramount released in 1920.

This is huge news. Until now, the only known print of Terror Island was the one in the Library of Congress, and that print is missing two reels that contain two signature Houdini escapes. Also missing are the original Paramount title cards. This is the print that has been used to release Terror Island on DVD, with descriptive cards filling in the missing reels.

We all knew Larry had The Grim Game, so there was always hope we'd one day see it (that dream came true last year). But the existence of Terror Island was unknown (at least to me), so the possibility of one day seeing the complete film seemed remote at best.

But it's not all good news. The Terror Island print was among items stolen from Larry's apartment after his death. Also stolen was Larry's print of The Master Mystery, which also may be complete. Rick says the police do "have a lead."

Let's hope the stolen prints can be recovered and Rick can do for Terror Island what he did for the The Grim Game. Might 2017 be the year of Terror? Fingers crossed.

In the meantime, Joe Notaro is piecing together the lost Terror Island scenes using photos and script excerpts from the Margaret Herrick Academy Library. You can read his first installment, which reconstructs the Rosemary Theby "vamp" scene, HERE.