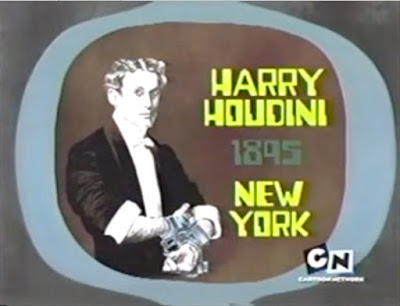 Time Squad was animated television series that aired on Cartoon Network for two seasons from June 2001 to November 2006. It follows the adventures of Otto Osworth, Buck Tuddrussel, and a robot named Larry 3000 who travel back in time attempting to correct the course of history. Creator Dave Wasson described the series as "a C-student's guide to history."

The first season found the trio traveling to New York in 1895 and meeting Houdini. The episode was called Houdini Whodunnit!? I don't know the original air-date, but you can watch the full first half of the episode which featured Houdini below.


Unfortunately, this video has been removed.

Houdini has become a popular presence in animated television. He's appeared on Jem and the Holograms, The Real Ghostbusters,  Madeline, Family Guy and even The Simpsons. He's also aided past time travelers from Doctor Who to the Voyagers.

Time Squad is currently not available on DVD.