Today's sad news is that the great Gene Wilder had died at age 83. During his long career Wilder touched on the edges of Houdini's world by playing Sherlock Holmes' Smarter Brother and a silent movie star in The World's Greatest Lover. But what I didn't know until today was that Wilder was from Milwaukee, where Houdini spent several formative years. A Google search revealed that the two men share wall space at the Fork in the Road restaurant in Mukwonago, WI. So I think that's reason enough to honor the passing of Gene Wilder here. 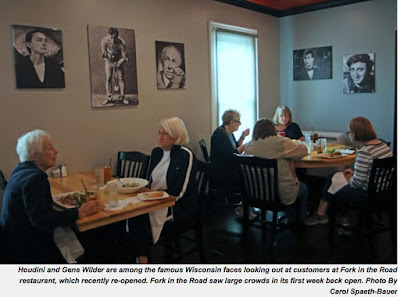 You can read Gene Wilder's obituary at the New York Times. The above photo is from Lake Country Now.