The talented Tom Interval has a must-see post on his blog Interval Magic about the December 1980 issue of Dynamite magazine which contained an article about Houdini and a Houdini puzzle "punch-out" card. Tom has scanned and animated the punch-out, so at long last we can see how it works without destroying the magazine (finding an issue with the punch-out intact can be a trick).

Houdini also appeared in the May 1976 issue of Dynamite (cast of Welcome Back Kotter on the cover). That issue contained nice original Houdini illustrations by Katrina Taylor, as you can see below. 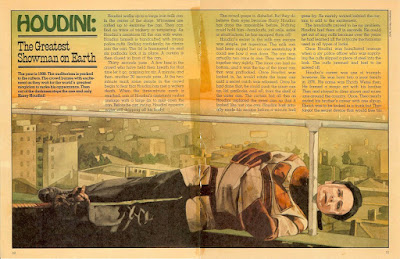 While I cherished this 1976 issue, somehow I didn't even know about the 1980 appearance! So a double thanks to Tom for his dynamite post.

Dynamite was published by Scholastic from 1974 to 1992, and will be very familiar to anyone who was of school age during this years. You can learn more about the magazine here.