I'm returning today to a favorite topic, that of lost Houdini posters. Below is the only known image of a remarkable Houdini poster that appears in Kenneth Silverman's Houdini!!! The Career of Ehrich Weiss. Oh to see this poster in color! 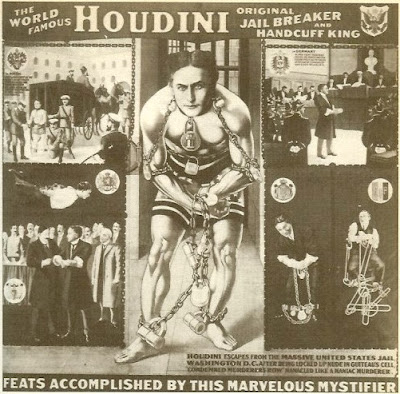 Silverman dates this as 1906 as it primarily features Houdini's escape from the United States Jail that year [read: Houdini's escape from Murderers Row]. The poster also features several famous European Houdini feats, including the Mirror Handcuff challenge (the only known representation in illustrated poster form), the Siberian Transport Cell escape (notice Houdini is not nude in this version), and his slander trial in Germany.

This image is credited as coming from the collection of the Museum of the City of New York. Does that mean they have the original? With hopes of getting a color image to share here, I wrote to the museum to find out. They got back to me quickly and were very helpful. Unfortunately, their response was disappointing:

"The image comes from a poster card issued by the J.G. Strobridge Company. Our understanding is that poster cards served as a catalog by which clients could order full size reproductions. The image we have is black and white. The measurements of the card and the image, respectively, are H: 5 inches, W: 8 inches and H: 4 ¼ inches, W: 4 3/8 inches."


So no color original. One wonders if an original even still exists. We do know this poster was used in Houdini's day. A variant appears in a street scene photo in Milbourne Christopher's Houdini A Pictorial Life (below).

Thanks to Lauren at the Museum of the City of New York.