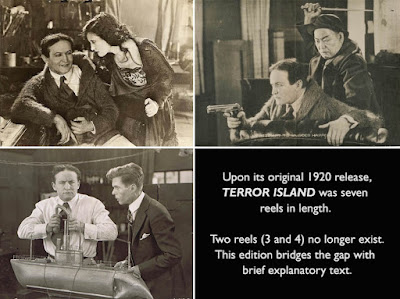 Joe Notaro at Harry Houdini Circumstantial Evidence has undertaken the task of "restoring" Reel 3 of Houdini's Terror Island using photos and script excerpts from the Margaret Herrick Academy Library in Los Angeles. While Terror Island is missing two full reels (3 & 4), Joe is just tackling just those scenes missing from the Kino explanation cards which fill in the gaps on the current DVD release. Below are links to all four installments.

As the action proceeds to Reel 4, Harper (Houdini) escapes from a burning wearhouse and an overboard box. Soon, all find themselves heading out to sea on their way to Terror Island.

Thanks to Joe for taking on this important work. Here's hoping one day we might see the film itself restored.