Houdini collector Jon Oliver took this photo of what is the last standing theater in Detroit where Houdini performed; the Madison. Today it houses Angelina Italian Bistro and office space, but the original theater marquee remains. 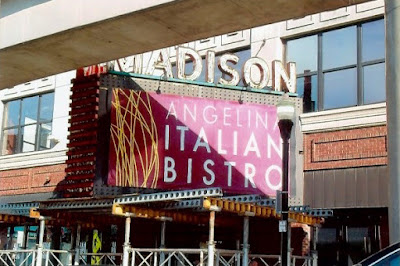 The Madison was built in 1917 as a movie theater. It was the largest theater in what was then Detroit's bustling theatre district, Grand Circus Park. In October of 1922, Houdini appeared on stage three times daily before showings of his film, The Man From Beyond. He also gave his lecture on spiritualism at the Madison. At noon on October 9, he did a suspended straitjacket escape from the Fyfe building at Grand Circus Park and Woodward. 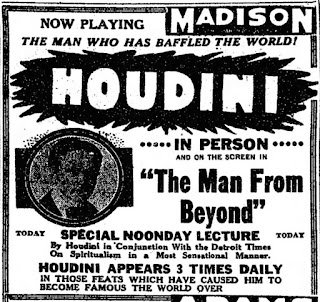 Of course, the last theater in which Houdini ever appeared was Detroit's Garrick Theater. The Garrick was torn down in 1928.