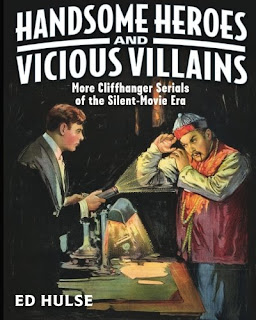 There's some fresh information here, including that the serial was shot at the Mittenthal and Standard studios in Yonkers, and that it was said to be the first serial to have all its chapters completed before release.

Quotes from exhibitors of the time attest to the serial's performance. A.B. Mendal of Galveston said: "Great. Brought people to my house that never came before. Best serial I ever played." But Jack Cairns of Detroit's Brooklyn Theatre said: "Leave it alone. Most impossible story I ever witnessed. Lost money on every episode after the seventh."

The book also includes several nice photos (although one is actually from Terror Island).

You can purchase Handsome Heroes and Vicious Villains: More Cliffhanger Serials of the Silent-Movie Era at Amazon.com (U.S.) and Amazon.co.uk (UK).