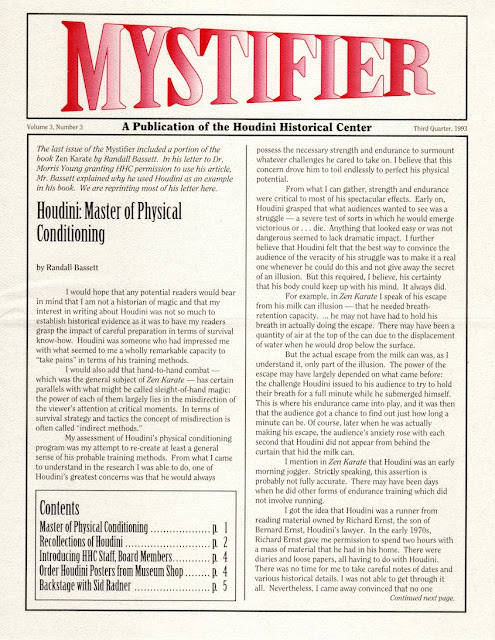 The Third Quarter 1993 Mystifier opens with a letter by Randall Bassett, author of Zen Karate (the previous issue contained an excerpt from the book), offering insightful speculation about Houdini's need to remain physically fit and his training regiment. It's a good letter and his observations seem spot on. For example:

From what I can gather, strength and endurance were critical to most of his spectacular effects. Early on, Houdini grasped that what audiences wanted to see was a struggle--a severe test of sorts in which he would emerge victorious or...die. Anything that looked easy or was not dangerous seemed to lack dramatic impact. I further believe that Houdini felt the best way to convince the audience of the veracity of his struggle was to make it a real one whenever he could do this and not give away the secret of an illusion. But this required, I believe, his certainty that his body could keep up with his mind. It always did.


Next up is a real treat and what in 1993 was a true game changer. It's an interview with Dorothy Young (referred to here as Dorthy Young Kiamie) who toured with the Houdini show in 1925. The interview is by Ken Silverman, who was working on his own Houdini biography as this time. Much of what the interview contains we are now familiar with, but there's a paragraph in which Dorothy mentions Bess and her smoking that feels new:

I never thought of Mrs. H. as being older. We were just pals. I had breakfast with her and spent my days with her, laughing and kidding. We'd buy clothes together; she liked clothing and was always charmingly dressed. She made all my costumes, too, using gorgeous materials and making the costumes very sexy. I remember that she smoked a lot. (Houdini didn't at all.) The doctor told her to stop, that she would live ten years longer. She said she'd rather enjoy the ten years smoking.


The interview is accompanied by the "Radio Girl" photo, which was also new to the Houdini world at this time. I wasn't yet a subscriber, but I can only imagine how exciting it must have been to receive this one in the mail.

Members of the Houdini Historical Center staff and board members are then introduced with a short biography of each. Readers are also informed that the museum's new poster reprints, Coliseum, Houdini in Kaiser Wilhelm's Court, Houdini in Russia, and Houdini in the Water Torture Cell are "hot off the press" and ready to ship.

Sid Radner devotes a large section of his "Backstage with Sidney Radner" column to a 1930 horoscope of Houdini that appeared in the book Your Future, A Guide to Modern Astrology by Sidney K. Bennett aka "Wynn." Sid wryly points out:

Considering that Wynn did not known when or where Houdini was born, missing the date by 13 days and the location by a few thousand miles, it is quite remarkable how accurate the horoscope is. Or can we attribute Wynn's skills to the fact that he was doing the horoscope after Houdini's death?


Sid continues with the news that the daytime soap opera The Bold and the Beautiful has a storyline in which two characters move into Houdini's house...in Beverly Hills? He notes that the new Arnold Schwarzenegger movie The Last Action Hero has "an important Houdini connection." He concludes with the news that the BBC is in Appleton shooting a Houdini documentary to be broadcast in England in October.