Here's a photo I recently found of the infamous "R.D. Adams" who claimed to have been Houdini's mechanic and privy to all the magician's secrets. In 1929 Adams offered up a series of wildly inaccurate "exposures" of Houdini's feats in Modern Mechanics magazine.

It interesting that this happened in the same year (1929) as the Arthur Ford seances. Houdini seems to have been a target for fraudsters this year. Adams' exposures included the Water Torture Cell, Walking Through a Brick Wall, and the Vanishing Elephant. Below is an ad for the series. 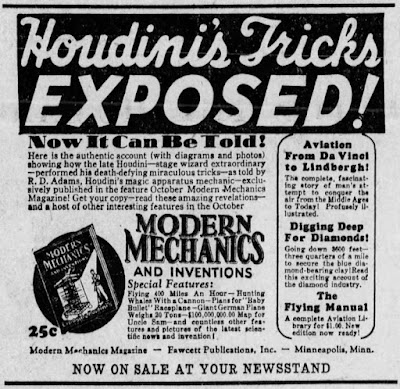 Curiously, even though today we can see that Adams' explanations are clearly bogus, both Leonard Hicks and Joseph Rinn claimed Adams did indeed reveal the correct methods. Even to this day Adams explanations still sometimes appear in print and online as legitimate.

So what is the real story of R.D. Adams? Was he simply an opportunist peddling fake secrets to a gullible publication? But if that was the case, why was he not debunked by the many vigilant Houdini friends and supporters out there, such as Dunninger, Hardeen, Bernard Ernst or even Bess herself? And why no action by the S.A.M.? Is it possible Adams was actually a front man for the Houdini estate? Could this have been a scheme to make some money for Bess in her time of need after the Ford scandal? As the methods were bogus, there was no real betrayal of Houdini's secrets, and this explains the silence and even support for Adams' explanations. Something to think about.

If one is interested in learning Houdini's real secrets (some of them, at least), two excellent books are Houdini's Fabulous Magic by Morris N. Young & Walter B. Gibson and Houdini The Key by Patrick Culliton.