Letter from Kellar to Houdini sells for $32,500 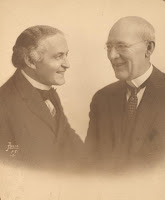 A two page hand-written letter from Harry Kellar to Houdini sold today in auction for an amazing $32,500 (plus 20% commission).

In the letter, dated Jan 29, 1918, Kellar congratulates Houdini on his vanishing elephant illusion, and says that he is very sorry to hear about the death of Mrs. Leon Herrmann and that both Leon and his wife were devoted to each other.

Just to show that content is king when it comes to letters, another hand-written letter from Kellar to Houdini that didn't have strong magic history references sold for only $1000.

The letter was just one of many items that sold for surprisingly high prices at the Martinka & Co. auction of items from the collection of magic scholar and Houdini biographer, Milbourne Christopher. According to Kevin Connolly at Houdini Himself, the auction brought in over one million dollars (including commissions).