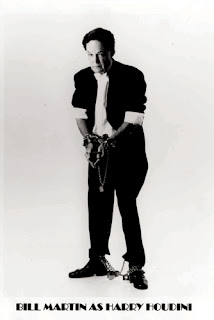 The Daily Times of Farmington reports that Harry Houdini himself will appear in a magic and escape show for all ages tonight (April 6) at 6:30PM at the Aztec Public Library in Aztec, New Mexico.

This free performance by Chautauqua actor Bill Martin is sponsored by the Aztec Public Library, the New Mexico Humanities Council and the New Mexico Department of Cultural Affairs.

Martin has re-enacted the life of Houdini for more than 10 years, traveling to schools, libraries and other civic organizations.

"Very few people reproduce Houdini's tricks," Martin said. "He was such a focused and dedicated individual that I find it just as much an honor as a challenge to portray him."

Martin's dynamic performance will include a $100 challenge to an audience member if the entertainer cannot escape from restraints including handcuffs, ropes, locks, chains and a straitjacket.

"It takes a lot of focus and attention to pull off some of the escapes and maneuvers that made Houdini famous," Martin said. "I always bring a magical sense to each show, with a little bit of mystery."

At the end of the show, "Houdini" will answer questions about his life. Martin will then discuss his role in the New Mexico Chautauqua program, followed by a book signing.