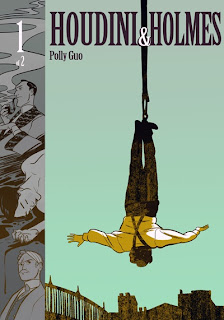 The 25 page book finds Holmes and Watson setting out to prove Houdini's innocence after the magician is accused of murder. While there have been Houdini-Conan Doyle mash-ups, this is the first graphic novel (that I'm aware of) that teams Houdini and Sherlock himself.

Polly's first print run was only 50 copies, which she sold online and at last year's San Diego Comic Con. This time she's making available 400 copies. You can also reseve a copy of Houdini & Holmes 2, which Polly says should be ready this summer.

Click here for instructions on how to order Houdini & Holmes.
Written by John Cox at 8:17 AM