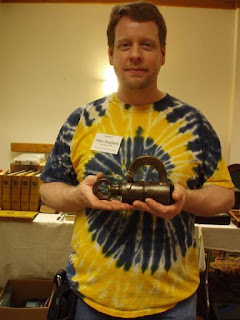 Check out this photo of Mike England holding an authentic Houdini lock at the 30th annual Crossroads of America Antique Padlock Show held in Indianapolis last weekend. But this isn't just any Houdini lock. Says Michael:

"The screw lock I am holding [...] is an original Houdini owned Siberian Cell Padlock. The gentlemen that is holding the Houdini lock in another photo is the owner, Jeff Strumberger and yes, he has documentation on this lock -- far more documentation than I have ever seen to support the fact that Houdini owned this lock...it is quite possible that this lock was one of the locks in the famous Houdini "shackled head to toe" photo" [either at Houdini's knees or at the ankles].


You can check out many more photos of the handcuffs, locks, and straightjackets that were on view at Handcuffs.org.

Thanks to Mike for letting me share his pic.
Written by John Cox at 1:05 PM