The secret recordings of Bess Houdini 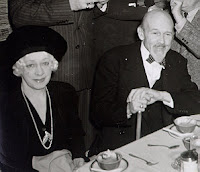 Imagine a collection of secretly recorded private telephone conversations between Bess Houdini and the "leading magicians of the day." Does this sound too good to be true? Well, apparently, it's for real!

In a 1966 issue of The Linking Ring, John Booth recalled paying a visit to Bessie and Edward Saint in their "small Spanish stucco bungalow" at 8565 Westknoll Avenue in Hollywood (now West Hollywood) in the '30s. "Mrs. Houdini was a lively little lady of complete naturalness," recalled Booth.

As they were sitting "engrossed in talk about the late showman", Booth suddenly heard his own disembodied voice coming from an unknown source within the room. "It was as though radio voices had suddenly begun to penetrate the air around us," said Booth. That's when Ed Saint revealed the secret, and dropped a bombshell:

"Madame Houdini is making a collection of records of her conversations over the phone with leading magicians of the world. We have seven prominent magicians, made this way, talking with Madame Houdini. None of the magicians has been aware of the recording, at the time, so they have been entirely spontaneous. When they are gone, and some are older men like Cardini and the Great Leon, this will be a valuable historical collection."


Holy Houdini! How many of these were made? What other magicians were recorded? And most importantly, where are these recordings today?

"Across the years, I have tried fruitlessly to find out who obtained these recordings from the Houdini estate," said Booth in 1980. "No one can tell me what happened to the voice records: they simply disappeared." 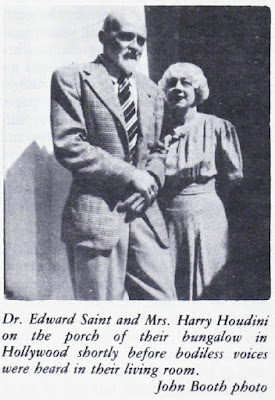 UPDATE: Secret recordings of Edward Saint revealed.
Written by John Cox at 7:21 AM