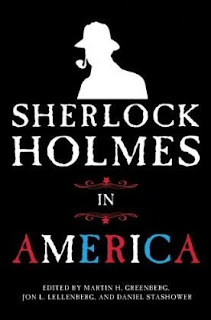 Here's one I completely missed! In 2009 Sherlock Holmes in America

was published by editors Martin H. Greenbeg, Jon L. Lellenberg, and Daniel Stashower. As the title suggests, it's a collection of short stories involving the great detective in America. However, Daniel Stashower's own contribution, "The Seven Walnuts", is not a Holmes story at all, but another in his Harry Houdini Mysteries series.

According to Baker Street Reviews (where the book receives four meerschaum pipes), "The Seven Walnuts" finds Houdini attempting to solve a mystery involving a theft and a shooting at a sideshow using Sherlock Holmes' methods of deduction. Houdini's brother, Dash (Hardeen), narrates the story.

Baker Street Reviews notes, "While one might jump to the conclusion that it is probably time for Stashower to move on [from Houdini]...as long as the mysteries are this much fun, he can keep on writing them as far as I am concerned."

Me too! I greatly enjoyed Stashower's Harry Houdini Mysteries and I'm thrilled to learn (even three years late) that I can enjoy another installment.
Written by John Cox at 9:39 AM