Tom Cruise was set to play Houdini in 2004 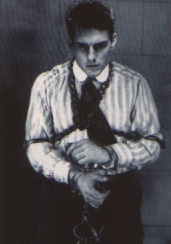 In a new interview on Who's Hoo at the Magic Castle, actor and magician Steve Valentine tells an interesting story about the time he was invited to producer Ray Stark's home for a dinner party. After the party, Stark showed him a script for his new movie: HOUDINI.

Of course, I've written about Stark's 30+ year struggle to produce a movie about the great magician in MAGIC magazine (October 2006), but what Steve adds to the story was something Stark said to him directly:

Cruise had long been rumored for the role (the photo mock-up here comes from Entertainment Weekly), but I've never been able to nail down whether he was committed, or if it was just media speculation. Now we have confirmation that Cruise was, indeed, set for the role.

Steve adds that Stark wanted him to be a magic consultant on the film, but that he died "like a week later", which would put this in 2004.

Is Cruise still open to playing Houdini, I wonder?

Steve Valentine recently set-up his own Houdini project at the Syfy channel called, Among the Spirits. Unfortunately, the proposed Houdini and Conan Doyle "stempunk" series wasn't discussed during the interview, but you can read about it here.

Who's Hoo at The Magic Castle is the online talk show created by Rob & Tommi Zabrecky and hosted by Fitzgerald. The show is taped before a live audience in the Inner Circle and is available for AMA members to view on the Magic Castle website.

UPDATE: Check out the full story of this never-made Houdini movie: The saga of Ray Stark and Houdini.
Written by John Cox at 11:02 AM