The catalog for Martinka & Co.'s Milbourne Christopher Collection auction is now online at LIVE Auctioneers. There are over 30 Houdini related lots, including two personal Hardeen scrapbooks, one of Houdini's rarest pitchbooks, Mein Training Und Meine Tricks, personal letters and manuscripts, a copy of A Magician Among The Spirits signed to Fulton Oursler (read about Oursler's attempt to make the first Houdini biopic), and A LOT more. 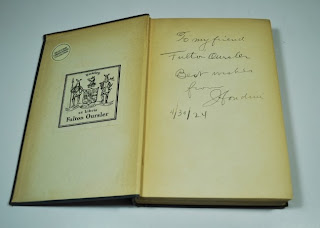 Click here for the full online catalog.
The auction will be held at the Hotel Pennsylvania (401 Seventh Ave.) in New York City on April 20th, 2011. A preview will be held on April 19th.