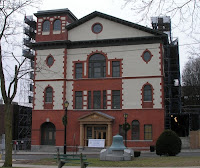 I didn't see it, but it appears the Ghost Hunters recently went in search of Houdini in an episode titled, "A Soldier's Story". The site of the potential haunting was the Sterling Opera House in Derby, Connecticut (right). The Ghost Hunters specialty is capturing EVP (Electronic Voice Phenomena) and, according to a wrap-up of the episode at 411mania, they did record something while trying to contact Harry on the stage of the historic theater.

I don't know. The show sounds pretty sketchy, but these are always fun. Maybe I'll try and catch a repeat. 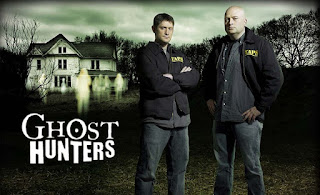 UPDATE: Having now seen this, Houdini only gets a mention as having performed at the theater. No ghost action.
Written by John Cox at 8:20 AM